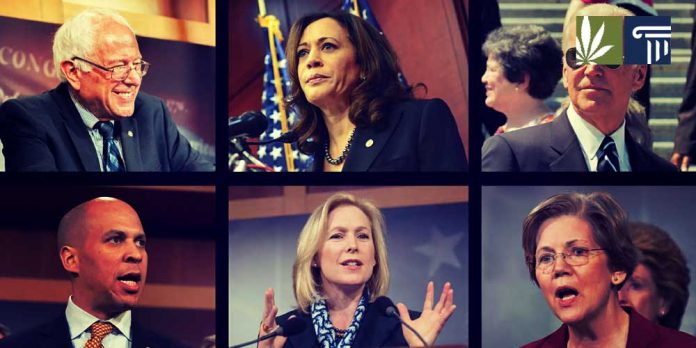 With another presidential election looming, the issue of marijuana reform at the federal level has seemingly become proof of potential Democratic candidates’ progressive credentials. For many, a Democratic candidate’s support of marijuana decriminalization shows their commitment to combating economic equality and unequal treatment of people of color in policing and the justice system.

“A Democrat who is not on board with legalization or addressing it in terms of repairing harms brought by prohibition for decades is going to have a tough time convincing any voter they’re serious about racial justice,” said Vincent M. Southerland, executive director of the Center on Race, Inequality and the Law at New York University Law School.

Justice for those who have suffered from prohibition

New Jersey Sen. Cory Booker introduced in February the Marijuana Justice Act, which would deschedule cannabis from the federal list of controlled substances and expunge prior convictions.

“It’s not enough to legalize marijuana at the federal level — we should also help those who have suffered due to its prohibition,” Mr. Booker said in a tweet.

Kirsten Gillibrand, Bernie Sanders, Elizabeth Warren and Kamala Harris are among the 2020 candidates in the Senate who also signed on as sponsors.

Even Beto O’Rourke, who is prone to dodging questions about controversial issues, has come out strongly in support of federal legalization. At his first outing as a presidential hopeful, in Keokuk, Iowa, he explained that his position is an issue of practicality and racial justice as the imprisonment rates for drug offenses are disproportionate among people of color.

“I say this as the father of a middle school student, where middle schools are one of the fastest growing markets for marijuana sales today,” he told a coffeehouse crowd. “In the black market, they do not ID — they do not care — as long as they can make that sale.”

The battleground states in the Midwest offer less progressive politics than the coastal states. Amy Klobuchar of Minnesota, who announced her bid in February, and Sherrod Brown of Ohio, who withdrew from the race this month, are opposed to federal legalization.

The position of Ms. Klobuchar, who aims to gain moderate voter support, is that individual states should be able to decide their own marijuana policy, rather than have it imposed from the federal level.

In the 2015 referendum to legalize recreational marijuana, Ohio voters overwhelmingly defeated the proposal.

Mr. Brown said in 2018 that the jury could not conclusively determine whether marijuana was a “gateway” to harder drugs in other states who had legalized adult-use.

Meanwhile, opioid overdoses have plagued Midwestern states. But according to the National Institute on Drug Abuse, there is no strong link between cannabis and increased abuse of harder drugs. A JAMA Internal Medicine study showed last year that prescriptions for opioids fell nearly 15 percent in the states that legalized medical marijuana.

Support for legalizing recreational marijuana has soared in polls since 2000 and shows little regional variation. High support among young adults under 35, whose disapproval of Mr. Trump is also greater than that of other age groups, is clearly of advantage to Democrats wanting to attract millennial voters.

Jonathan P. Caulkins, a professor at Carnegie Mellon University, said that support has also increased among African-Americans, who in the last 15 to 20 years shifted from opposing legalization to favoring it.

Kamala Harris, a former attorney general of California, who is black, is one of those who switched their position. In 2014, she considered adult-use legalization “irresponsible”. Nevertheless, it passed in a referendum two years later. By 2017, Ms. Harris hailed the war on drugs a failure and called it “a war on poor communities more than anything.”

Michigan was the first among Midwestern states to legalize recreational marijuana. Around the same time, Missouri, Oklahoma and Utah overwhelmingly voted in favor of medical marijuana and by now, 33 states and the District of Columbia have legalized it. New York and New Jersey could be the next states to approve legalization as Democrats are making gains in the state government.

While Democratic candidates are trying to capitalize on the support for legalization among their target demographics, Mr. Trump has been inconsistent on the matter. During the 2016 campaign, he claimed to support the states’ right to set their legalization policies, but appointing Jeff Sessions as attorney general signals the opposite. Yet last year, Mr. Trump suggested he could get behind a bipartisan bill introduced by Colorado Sen. Cory Gardner (R) and Ms. Warren that would prevent federal crackdown on state-licensed cannabis businesses.