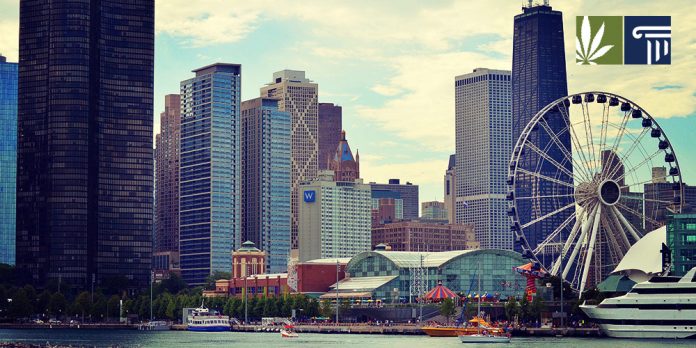 The Cannabis Regulation and Tax Act went into effect on Jan 1, 2020, clearing the way not only for legal cannabis sales, but also to expunge hundreds of thousands of criminal records for marijuana-related offenses.

Illinois Gov. J.B. Pritzker has already pardoned 11,000 people with prior cannabis convictions involving less than 30 grams, and a further 700,000 people with arrest records could soon benefit as well.

Under the new law, any adult 21 years and older can purchase 30 grams of cannabis, 5 grams of cannabis concentrate and cannabis-infused products containing less than 500 milligrams of THC from a licensed dispensary. Nonresidents of Illinois are also allowed to make purchases, but only at half the quantities of residents.

“The significance of yesterday was, it was the end of prohibition and the beginning of how we hope to grow a new industry in Illinois,” said Toi Hutchinson, senior cannabis adviser to Gov. J.B. Pritzker.

The $3 million in cannabis-related product sales comprised more than 77,000 transactions across 40 licensed dispensaries in Illinois. Ten of these dispensaries are in Chicago, where long lines snaked around buildings and across parking lots.

At the Rise dispensary, at an industrial park in Mundelein, hundreds queued outside in the cold weather, with the first customer arriving the day before.

Cresco Labs said there were 400 people waiting outside its Sunnyside shop in Wrigleyville on its first day of business.

.@crescolabs says about 3,400 customers purchased more than 9,000 marijuana products at its five stores in Illinois yesterday. The average spend was $135. https://t.co/xYSHYOOpJA pic.twitter.com/SvOblsnber

One of the Sunnyside customers was Lt. Gov. Juliana Stratton, who bought edible cannabis gummies.

Illinois is the eleventh state, plus D.C., to legalize adult-use weed sales but the first to do so through legislation passed by lawmakers, rather than through a voter ballot initiative.

Illinois’ strong first day of sales compares well with other states that have legalized adult-use marijuana.

Oregon raked in around $3.2 million in its opening days sales back in 2015, but Michigan only made half that amount in its first week. Nevada took four days to amass $3 million in weed sales when it started operating in 2017.

Analysts estimate that Illinois’ legal recreational market will eventually take in between $2 billion and $4 billion in annual sales. But for the time being, sales on the black market are expected to exceed legal sales until 2024.

Still, state and local municipality coffers can anticipate significant revenue. Under the Cannabis Regulation and Tax Act, 30 percent of legal sales are allocated for state tax revenue, while 3 percent goes to municipalities.

Toi Hutchison, one of the key architects of Illinois new cannabis regulations, welcomed the milestone in the state’s history as an important step away from its prohibition past.

“Launching the legalization of cannabis in a way that includes communities left behind for far too long, creates good jobs and expunges thousands of records for those who have lost out on opportunities and ends prohibition,”she said.

“Today is a historic new day, and as we move forward with growing this industry, I thank all those who worked hard to make the launch a success and will continue to dedicate themselves to expanding opportunities and righting the wrongs of the past.”

As the sixth most populous state in the country, the opening of a legal adult-use market in Illinois is a huge boost to the marijuana industry. It may also lead to greater calls for reform among Illinois’ neighbors, where recreational cannabis remains illegal.