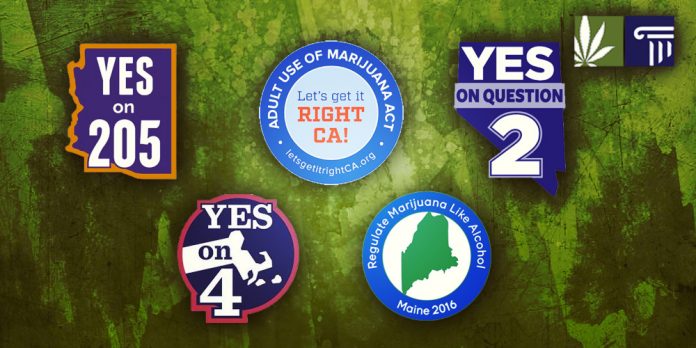 Nov. 8 is shaping up to be a very big day for marijuana in America. That may be hard to see amid the chaos that is the 2016 presidential race, but five states will decide next month whether they want to legalize the drug. 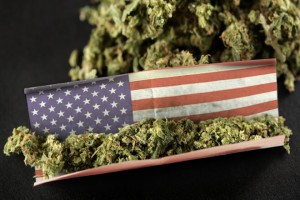 They include Arizona, California, Maine, Massachusetts, and Nevada. All five ballot initiatives have strong public support, with polls showing most if not all of them are likely to pass. But nothing is guaranteed, and the outcome in each of these states will have a major impact on the future of cannabis reform.

Here’s a look at the proposals in these five places.

Arizonans will vote on Proposition 205, a ballot initiative to legalize purchase, possession, and use of up to 1 ounce of marijuana for recreation, plus private cultivation of up to six plants. The law would set an age limit of 21, impose a special sales tax, and create regulations for a newly legal cannabis industry.

State law requires a vote of 50 percent plus one vote to pass a constitutional amendment such as Prop. 205, and recent polls show voter support just above that point. Opposition is weak, but even a small shift by undecided voters against the initiative could kill it.

California’s Proposition 64, also known as the Adult Use of Marijuana Act, is backed by nearly 60 percent of voters, according to the most recent polling. Assuming it passes, it would create the largest legal market for marijuana on earth.

Prop. 64, like Prop. 205 in Arizona, would legalize sale, possession, and use of up to 1 ounce of recreational weed by adults over 21. California residents could also grow up to six plants on private property.

Aside from the presidential race between Hillary Clinton and Donald Trump, Prop. 64 is the most important marijuana-related vote on any American ballot in November.

Maine is competing with Massachusetts to become the first state to bring legal marijuana to the East Coast. Victory is likely in both states, but odds are slightly weaker in Maine, where recent polls show about 53 percent of voters plan to fill the bubble for Question 1.

This initiative would legalize up to 2.5 ounces of recreational cannabis for adults 21 and older, who would also be allowed to grow up to six flowering plants at home. Like the other states on this list, Maine requires a vote of at least one vote more than 50 percent to pass amendments to its constitution, meaning Question 1 is still far from a lock.

Question 4, which will appear on the statewide ballot, currently has the backing of about 55 percent of Massachusetts voters, more than any of the five states except California. This measure would legalize a relatively large amount of recreational pot for adults: up to 10 ounces at home and up to 1 ounce purchased or transported in public.

Residents would also be allowed to grow up to six cannabis plants and keep whatever supply they produce (up to 10 ounces). Question 4, like the ballot initiatives elsewhere, would levy a tax on marijuana sales and impose industry regulations.

Nevada’s Question 2 is similar to the proposals in the other states, in that it would allow sale, possession, and consumption of up to 1 ounce of pot by adults 21 and over. Support hovers around 50 percent, enough to offer hope but not guarantee victory.

But if legalization passes in Arizona, California, and Nevada, the entire Pacific Coast and a large swath of the desert Southwest would allow recreational cannabis use. That in itself would seal the fate of the drug war in America.

Tell us: Do you live in a state where legalization is on the ballot? Do you think it will pass? Leave a comment below and let us know what you think. 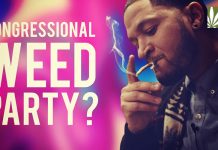