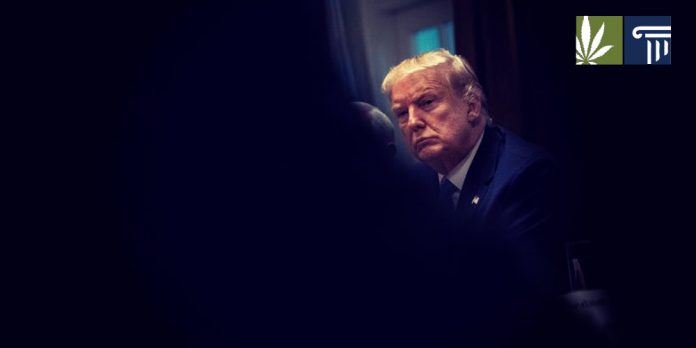 Cannabis reform advocates responded to President Trump’s claim in a secretly recorded video that marijuana use leads to an “I.Q. problem.”

“In Colorado they have more accidents,” the president said when the topic of marijuana legalization was raised. “It does cause an I.Q. problem.”

The president made his comments in a meandering conversation at a private dinner with a group of donors in April, 2018, where he discussed politics, trade and firing the U.S. ambassador to Ukraine. The video was taken by Igor Fruman, who was accompanied at the dinner by his associate Lev Parnas. The two men are key figures in the president’s impeachment inquiry owing to their dealings with President Trump’s lawyer Rudy Giuliani in exerting pressure on the Ukrainian government for political favors.

While there is much about the discussion to be concerned about, marijuana reform advocates were quick to call out Trump’s well-worn claim by highlighting a study showing there is no “causal relationship between marijuana use and IQ loss.”

The marijuana legalization movement has made tremendous gains in recent years, but still has to contend with prohibitionist propaganda, espoused by people with an “I.Q. problem” of their own, which demonizes cannabis use.

“[W]hat truly causes a decline in an individual’s intelligence is adhering to false Reefer Madness rhetoric that flies in the face of available science,” said Erik Altieri, NORML executive director.

“If President Trump truly believes that responsible marijuana use by adults leads to a loss of IQ points, we suggest he immediately consults his physician to see if he is suffering from this affliction or at the very least consults the wide body of available research that debunks this old talking point,” he added.

Sheila Vakharia of the Drug Policy Alliance said Trump’s comments fly in the face of the experiences of states that have pursued marijuana reform.

“Trump’s remarks simply reveal that he is out of touch, given that the majority of Americans support marijuana legalization for both medical and adult use,” Vakharia said. “This type of rhetoric is fear-mongering and inflammatory.”

“The evidence is clear from the dozens of states that have legalized medical and adult use—the sky isn’t falling and the kids are alright,” she added.

“Cannabis, look, you’re talking about marijuana, right? You can’t do banking there?” the president said. “I don’t know if that’s a good thing or a bad thing.”

Trump, who previously said he is in favor of letting states determine their own cannabis policy, then asked the table for their views on marijuana legalization, and whether it is “actually good for opioids.”

One of the attendees said it is a “better alternative” than prescription opioids. His son, Donald Trump Jr. was next to take up the cannabis cause by saying “alcohol does much more damage,” and learnedly noting that “you don’t see people beating their wives on marijuana. It’s just different.”

While the discussion was not exactly a meeting of the minds on the topic, some advocates believe it shows Trump’s administration is at least open to the idea of comprehensive cannabis reform.

“I think it is pretty clear that he understands that prohibition is a failure from an economic standpoint, that states should be free from federal interference, and that reform could help with the opioid epidemic,” said Morgan Fox, spokesperson for the National Cannabis Industry Association.

“His statements regarding access to banking suggest that he would be willing to sign cannabis banking reform legislation that crosses his desk. Generally, it is very heartening to see that the administration is having substantive conversations about it, and we welcome the opportunity to continue this discussion with the president to make sure he recognizes the urgency of reform and has the facts,” Fox added.

Parnas pushed Trump even harder on the question of marijuana legalization later in the conversation. He said the president should make it part of his platform for the midterm elections to help secure younger voters.

“It’s so far out you’re not going to stop it,” Parnas said. “I think you need to be ahead of it.”

Trump didn’t reply directly to Parnas’ suggestion, nor did he take him up on it for the midterms. But with the 2020 elections now looming, Don Murphy, federal policies director at Marijuana Policy Project, believes the president still has a chance to make history.

“Even his predecessor continued that same failed policy, throwing even more people in prison. Not only that, he has a chance to out flank every Democratic candidate in the field,” Murphy said. “He would be remembered as our greatest criminal justice reformer in history.”

That title would surely sound like music to President Trump’s ears.