A top official from the White House’s anti-drug office conceded that, contrary to the claims of many marijuana prohibitionists, youth cannabis use has fallen in those states which have legalized the plant.

“For some reason, the use rate among this age bracket is going down,” said Dale Quigley, the deputy coordinator for the National Marijuana Initiative, a unit of the High Intensity Drug Trafficking Area (HIDTA) program. “We’re not 100 percent sure why it’s going down. It’s a good thing that it’s going down, but we don’t understand why.”

In his presentation, Quigley focused in particular on the experiences of Colorado but noted that the reduction in teenage marijuana consumption is a national trend which has not been neatly explained yet. He begins his remarks at around 09:22 AM in the video stream archived on the North Dakota legislature’s website. 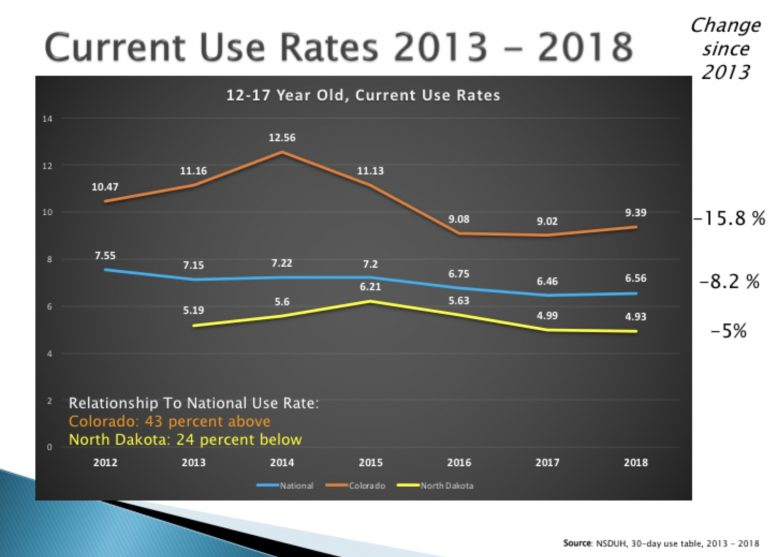 “In looking at the state of Colorado for 12-to-17 year old current use, we had a spike in ’14, but overall the use rates in Colorado have been declining and that matches what we’re seeing in other states and also the trend we’re seeing nationally,” said Quigley, who has been involved law enforcement in Colorado since 1979.

Quigley sourced his data from the US Substance Abuse and Mental Health Services Organization (SAMHSA) which carries out drug use surveys every year, with “current use” defined as consumption within the past 30 days.

The National Marijuana Initiative aims to inform citizens and policymakers through presentations and educational resources so they “can make well-informed choices regarding marijuana use and regulations.” It is part of the HIDTA program, which is funded by the White House Office of National Drug Control Policy.

Quigley’s comments undercut an argument often used by cannabis prohibitionists; that legalizing cannabis will lead to an increase in use among youth. In the same presentation, however, Quigley made unsubstantiated, even contradictory, claims about cannabis and youth behavior which would support the fears of anti-marijuana reform advocates.

After informing the attendees of how Colorado cannabis tax revenues had bolstered school budgets and investments, Quigley shared details of a conversation he had with an unnamed school superintendent.

One explanation Quigley offered for the drop in teen marijuana use after legalization is they may be more wary nowadays of strong marijuana products and vaping, though he offered no research to back up this theory.

“We’re hearing anecdotal stories about kids that are afraid of the potency levels, you know, teens that have had adverse reactions to vaping and concentrates,” he said.

Quigley’s presentation is not alone in highlighting the apparent decrease in teen marijuana use rates post-legalization. A literature review of 42 studies by Leafly concluded that marijuana legalization is associated with a fall in teenage cannabis use. A 2018 study of teenagers in California also reported a drop in marijuana use among teens, while a more recent study found a decrease in youth admissions to drug treatment centers for problematic cannabis use in states which had legalized cannabis.