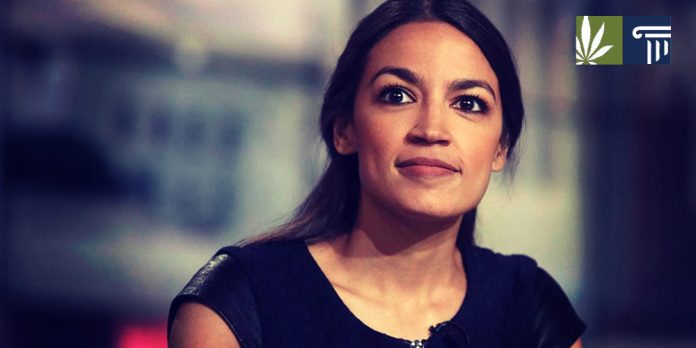 Ocasio-Cortez appeared at a series of Iowa town hall events at the end of January as a surrogate for Sen. Bernie Sanders’ (I-VT) campaign for the Democrat nomination, while he was tied up with President Trump’s impeachment hearing in Washington. The congresswoman was grilled by a town hall audience member on Sanders’ Medicare for All plan, who asked if it would be funded by legal marijuana sales.

Ocasio-Cortez responded that while increased tax revenue is not the main reason to legalize marijuana, it is no doubt true that “Colorado is doing a great job of taxing it to fund schools.”

Last year, the Colorado Department of Revenue reported that cannabis tax revenues since legalization now exceed $1 billion. But Ocasio-Cortez cautioned that a huge undertaking such as universal health care would require funding from multiple sources.

“In terms of financing, I think the financing for our health care program would potentially come from different sources,” she said. “Senator Sanders has outlined how he would pay for Medicare for All.”

“I would just say the financing is a different question,” she said. “But when it comes to decriminalization and legalization, I know that the senator believes in the legalization of marijuana and, frankly, having that part of a decarceral approach to the criminal justice system.”

Steering the question of marijuana legalization even further away from public finances, Ocasio-Cortez went on to detail the harms done by marijuana criminalization, including worsening racial wealth inequalities and mass incarceration.

“[The war on drugs] exacerbated the racial wealth gap in America as well,” she said. “But not only that, it tore apart communities, it tore apart families and it was an explicit targeting of black and brown communities that dates back to the Nixon administration.”

“On one hand it’s an economic issue, but much deeper, it’s a justice issue. This is an issue of justice, this is an issue of mass incarceration. The United States has historically incarcerated more people per capita than any other country in the world. We need to live up to our values about what ‘Land of the Free’ means and transitioning to that means dismantling the system of mass incarceration. That’s an incredibly important part of this agenda.”

Sanders has supported marijuana reform for a long time, but stops short of the more comprehensive drug decriminalization positions set out by Ocasio-Cortez. Along the lines of countries such as Portugal, she thinks all illicit drugs should be decriminalized and that drug use should be treated as a health issue, not a criminal one. She has also come out in favor of promoting research into therapeutic applications of psychedelics by relaxing federal laws.

Support for federal-level marijuana reform has been a cornerstone of the Democrat primaries, aside from the campaigns of former Vice-President Joe Biden, and new entrant to the race and former New York City Mayor Mike Bloomberg.