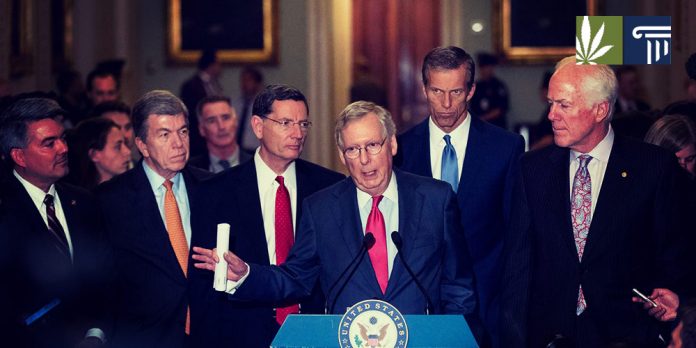 Last year’s passage of the SAFE Banking Act through Congress, after six years of trying, was a landmark event for marijuana reform in the United States.

In an increasingly rare showing of bipartisanship, lawmakers overwhelmingly approved the bill in a vote of 321-103. While some remained skeptical, it seemed, to the relief of both medical and recreational cannabis retailers across the country, that they could soon open bank accounts, receive more comprehensive insurance, and move away from being cash-only operations. This would simplify their auditing process and, most crucially, better protect their staff and inventories by making their stores less appealing targets for robberies and burglaries.

But since making its way to the Republican-controlled Senate in September, the SAFE Banking Act has stalled. Senate Majority Leader Mitch McConnell is seemingly only interested in marijuana reform that benefits hemp farmers in his home state, while Senate Committee Chair for Banking, Sen. Mike Crapo, wants to introduce more stringent requirements to the SAFE Banking Act before a vote in the Senate. This includes mandatory product potency disclosures and a touted 2 percent THC concentration limit on products in order for cannabis businesses to be eligible for financial services.

Sen. Crapo’s comments led a bipartisan coalition of lawmakers to send him a letter urging him to drop his recommendations which they describe as “unworkable” and act quickly on the bill’s passage.

“Our bill is about public safety,” the congressmen wrote. “It does not change the legal status of marijuana and is focused solely on taking cash off the streets and aligning federal banking laws with the decisions states are already making regarding cannabis.”

It doesn’t take a degree in criminology to understand that having big stacks of cash lying around in cannabis dispensaries creates a higher risk of break-ins and armed robberies. But it seems that the problem is becoming more acute now that greater numbers of people live in a jurisdiction that permits some form of legal cannabis retailing.

Burglaries at cannabis dispensaries recorded a three-year high in Denver last year. One dispensary in San Diego County reported losing more than $300,000 worth of product in one night following a break-in last month. More than $145,000 was stolen from a marijuana cash courier’s unmarked van as he filled up at a gas station in Santa Ana, California a couple of weeks back. An armed man robbed a marijuana retailer in Renton, Washington state, on December 29, 2019. While isolated examples, there are as of yet few studies to comprehensively look at the link between crime and the cash-only nature of cannabis businesses.

Banks and other financial institutions also recognize the risks of the cash-only system and are calling for the SAFE Banking Act’s passage into federal law. The American Bankers Association provided a written statement to the Senate Committee on Banking regarding the bill shortly after the congressional vote.

“In Denver, [the roughly 500] cannabis businesses make up less than 1% of all local businesses but have accounted for 10% of all reported business burglaries from 2012-2016. On average, more than 100 burglaries occur at cannabis businesses each year according to the Denver Police Department, and burglaries and theft comprise almost 80% of Denver’s cannabis industry-related crime,” the statement read.

Banks and other financial institutions are also calling for it in their own interests. They could turn a profit and not need to worry about handling money from cannabis retailers for fear of federal intervention in the form of lawsuits, appropriation or sanctions. For an industry that generated an estimated $1 billion in tax revenues from recreational sales across the country in 2018, legal provision of financial services could be a game-changer.

Some form of legal financial services for cannabis businesses appears inevitable now that more than half of Americans live in an area where they can purchase state-legal marijuana. Perhaps Crapo’s hand-wringing on the issue is just a way to extract concessions in his own interests for the time-being, but as Erik Altieri, NORML Executive Director, notes in strong terms, he is playing a dangerous game with people’s safety on the line.

“Any theft or injury that arises from cannabis businesses being forced to operate in a grey area is firmly on the shoulders of Senate Republican leadership,” Altieri said.

“They can talk a big game about supporting states’ rights and small business, but their inaction puts an industry and lives at risk. They should be ashamed of their inaction and voters sure won’t forget come November.”