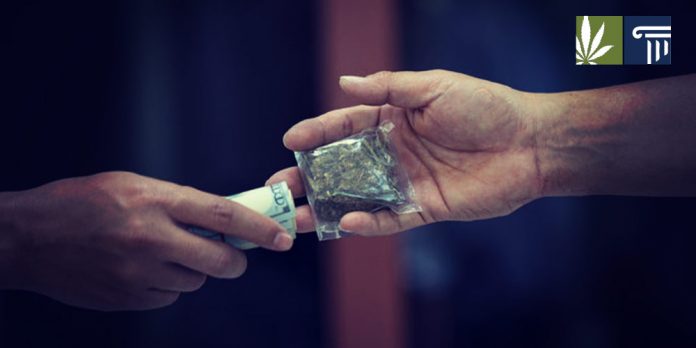 Heavy-handed state regulations may be why black markets for marijuana persist after legalization, according to new exploratory research looking at the experiences of the first two U.S. states to establish legal cannabis markets.

“The qualitative analysis of news reports reveals that regulation is one of the main reasons that people stay in the illicit market,” the study claims.

“The comparison of marijuana crime trends in Colorado and Washington shows mixed findings. While marijuana offense rates in Colorado largely remained steady over the years, those in Washington increased dramatically after the implementation of more intensive regulations.”

The research comes in the form of a master’s thesis by Sikang Song, a criminology and criminal justice graduate at Portland State University in Oregon.

For his thesis, Song wanted to understand why criminal markets continue post-legalization once legitimate, safe ways to buy, sell, and produce marijuana have been established.

Song cites California as an example of this phenomenon. One study said that in 2018, 18 percent of people who bought marijuana did so from an unlicensed seller. Authorities in California have since sought to clamp down on the illegal marijuana market.

Song suspected that there may be an association between how burdensome a state’s marijuana regulations are and how active the black market remains.

To test this hypothesis, Song decided to focus on Washington and Colorado. He collected news articles featuring interviews with various individuals who continue to participate in the illegal market after prohibition ended. He then gathered information on arrest rates pertaining to marijuana in Washington and Colorado after new marijuana regulations had been introduced.

Song found that most individuals who continued to operate on the black market did so because of “strict regulations and the high cost associated with the compliance.”

“Terms such as ‘overregulation,’ ‘cost of compliance,’ ‘high taxes’ are frequently used in the headlines and texts to describe ‘barriers’ for ‘small producers’ to enter the legal market or ‘drive’ them to the black market.”

Other reasons given for participating in the illegal market were high taxes, market fluctuations, and long-standing organized crime.

The reasons given by interviewees in news articles cohered with Song’s analysis of the crime rate in Washington, which increased after more regulations were introduced.

“Although the findings are not conclusive, the results of Washington data show that regulation intensity may be one of the main factors that influences or explains the persistence of illegal cannabis transactions after the legalization,” the study claims. “The fact that Washington’s marijuana black market kept growing after the implementation of more complex and sophisticated regulations at least indicates a correlation between regulation intensity and the increase of the black market in the case of Washington.”

The picture is different in Colorado though, where no significant changes to marijuana arrest rates following new cannabis regulations were detected. This, Song argues, could be due to the fact that regulations in Colorado are more lax, such that “the magnitude of illicit marijuana activities may be affected by regulation intensity in some states.”

The research is a first step towards a fuller understanding of the relationship between marijuana regulations implemented by states and the prevalence of an illicit market for cannabis.

Song’s findings suggest that extensive regulations could encourage criminal activity, and so lawmakers should think carefully about just how necessary certain rules are.

Song suggests instead that lawmakers should prioritize creating “equitable and accessible market that allows the coexistence of both large and small businesses” as the best way to combat illicit markets in marijuana.

“The cost of compliance to regulations should be reduced to remove the barriers of establishing a legal marijuana business,” Song concluded.

“[F]uture policies should also pay more attention to cracking down [on] persistent illegal growers and sellers and organized crime groups who are unwilling to participate the legal market,” he added.