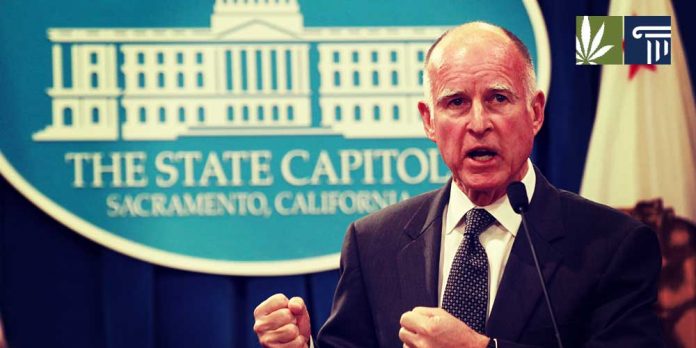 Early this month, California Gov. Jerry Brown cleared his desk of some marijuana bills. Since California voters approved the Control, Regulate, and Tax Adult Use of Marijuana Act in 2016, legislation and regulations have been approved to address the mandate. Although Brown is known as a progressive, he has not been in the vanguard of legalization, and the notes on his vetoes express a centrist policy.

Bills that Brown signed into law include:

SB 1294, the California Cannabis Equity Act, which allocates $10 million to an investment equity program for minority business owners. “The signing of SB 1294 recognizes the failed efforts of the war on drugs, but more importantly, it highlights the disproportionate devastation cannabis criminalization has had on communities, and helps address the harms by reducing barriers to licensure and increasing opportunities for employment” said the bill’s author, State Sen. Steven Bradford (D-Gardena).

SB 1409, which changes the definition of “industrial hemp,” allowing for increased hemp farming in California. “This is a big win for our local farmers, and it’s going to revolutionize agriculture,” said state Sen. Scott Wilk (R-Santa Clarita), who wrote the bill.

AB 1793, which provides for the automatic expungement of criminal convictions related to marijuana. “Outdated convictions shouldn’t be a barrier to employment & housing,” tweeted Assemblymember Rob Bonta (D-Oakland), who introduced the bill.

AB 2020, which allows cannabis use at special events held on private and public property.

SB 829, which would have allowed dispensaries to give product away. Although intended to help indigent medical marijuana patients, the bill was, as Brown noted, in conflict with the 2016 act.

SB 1127, which is also known as JoJo’s Act. Like Ashley’s Law in Illinois, the bill would have allowed parents to administer cannabis medicine to their children on school grounds. For Brown, the law “goes too far.”

SB 1863, which would have allowed cannabis businesses a tax deduction. “This proposal is best evaluated as part of the budget process,” noted Brown, who brought the state’s budget deficit under control after being elected governor again in 2011.

Two years after voters approved adult use, the governor’s signature has legalized adult use at special events, opened doors to industrial hemp farming, and taken steps to right past wrongs in enforcement. His veto, however, prevented a tax deduction and two laws in conflict with existing law.

What do you think? Will hemp farming take off? Will cannabis pet meds become an investment opportunity? Leave a comment below.