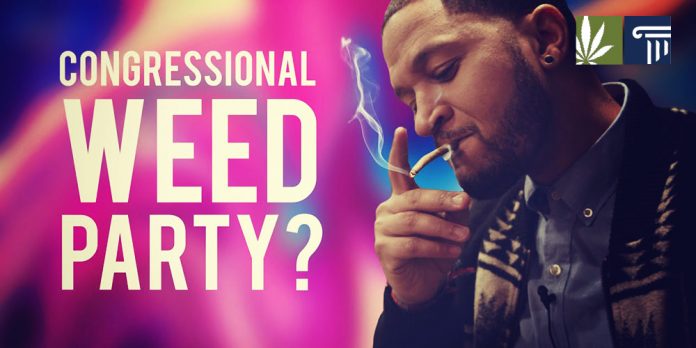 The video features Clark, a special education teacher and Air Force veteran, and his campaign team kicking back with blunts and shots as they take some time off ahead of Illinois’ March 21 primary election.

Clark, who is a registered medical marijuana patient, has form when it comes to cannabis and campaign videos. Last November he smoked marijuana onscreen as he explained how it had helped him in the wake of an injury he sustained in a Seattle shooting.

“Weed has literally saved my life. I’m a veteran with PTSD,” Clark said. “It’s time we changed this narrative that exists, eliminate the stigma.”

Clark’s openness about his marijuana use appears to be working. He is running against Rep. Danny Davis, who has represented the 7th Congressional District since 1997, in the state’s March 21 primary elections. Clark ran for Davis’ seat two years ago and picked up 26 percent of the vote, but is now expected to perform better against the incumbent. One indication of this is that Clark garnered an endorsement from the Chicago Sun-Times which said in an editorial that the district “deserves a representative who is impatient to change the world, which might be Clark’s best trait.”

While support for marijuana legalization has become commonplace among liberals and moderates alike, what sets Clark apart is his unapologetic attempt to challenge taboos around smoking weed which persist even in states that have legalized cannabis.

“I first heard about Anthony Clark on Facebook,” one supporter says in Clark’s new video, “and I seen him and a group of three people smoking a blunt. It’s ending the stigma. It’s ending the harsh stigma.”

Clark acknowledges these successes in the video, but tells attendees there is still much work to be done as law enforcement is still “jailing street dealers… who are predominantly black and brown in poor communities.”

Clark could well be the bold voice Chicago needs to ensure state officials keep to their promises for social equity and racial justice in the burgeoning Illinois cannabis industry.