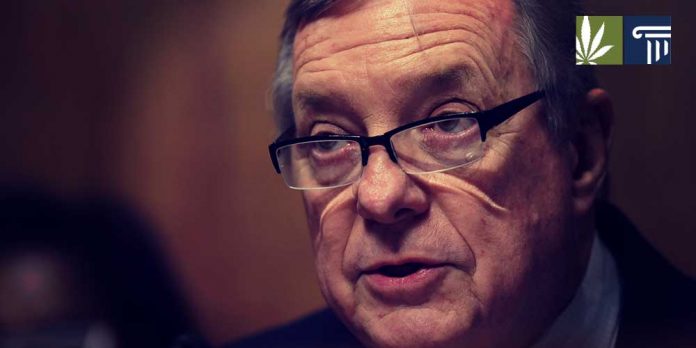 A Democratic senator introduced a bill to congress last month that would reclassify marijuana under the Controlled Substances Act from Schedule I to Schedule III, in order to remove obstacles facing medical researchers studying the drug.

Sen. Dick Durbin (D-IL), who is the second highest ranking Democrat in the Senate and serves as minority whip, included provisions in the bill that would require several federal health and science agencies to facilitate more research into marijuana.

The main research priorities would be determined by the Centers for Disease Control, National Institutes of Heath (NIH), and the Substance Abuse and Mental Health Services Administration.

As stipulated by the bill, these would likely include studies concerning those health conditions best-suited for marijuana treatment, and research into the “long-term effects of cannabis use, including dose-response relationship and the connection between cannabis use and behavioral health.”

Also included are provisions requiring the Department of Health and Human Services to create a data collection point built up of survey information and public medical records to track and better understand the impact of marijuana treatment on people’s health outcomes.

Durbin’s bill would also enable universities to apply for a “Centers of Excellence” designation through the NIH, permitting marijuana research for 5-10 year periods following just one inspection and subsequent approval from the Drug Enforcement Agency (DEA). Currently, the DEA only grants approvals on a study-by-study basis, while vetting each researcher involved in the work.

DEA approval under the bill would mean that universities could grow their own research-grade marijuana, instead of relying on a supply from the only federally-authorized grower in the country which produces a limited quantity of notoriously poor-quality cannabis. This situation has led researchers to take legal action against the DEA.

“With some form of legalization on the books in over 30 states and now Illinois, I want to lift federal restrictions so we can conduct additional medical research on marijuana,” Durbin said in a press release. “We need a better understanding of promising uses of cannabis for treatment, as well as how marijuana use impacts public safety and specific populations—including children, pregnant women, and drivers.”

“While more research is important, the congressional debate has shifted so much that senators from all states—especially legal states—should be thinking bigger and looking at broader bills that Sens. Kamala Harris (D-CA) and Cory Booker (D-NJ) have proposed,” said Michael Collins, director of national affairs at the Drug Policy Alliance.

“Their bills would enable more research, but would also end federal prohibition and give back to communities impacted by the war on drugs,” he said. “In 2019, this is what reform looks like.”

Durbin recently provoked the ire of proponents for marijuana reform by describing Illinois‘ medical cannabis program as “almost a laughing matter,” arguing that the claims made as to the drug’s therapeutic value are not backed up by research.

But at least with his new proposal, it seems he is trying to open up avenues for more research.