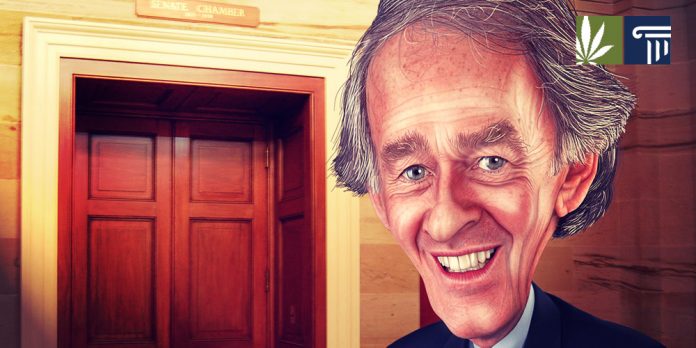 If you’re a long-serving Democratic Senator seeking another re-election, and face a young, progressive challenger then it’d probably be wise to sign on to at least one of the marijuana legalization bills circulating around Washington at the moment.

At least, that seems to be the advice Sen. Ed Markey (D-MA) has taken in response to Rep. Joe Kennedy (D-MA) announcing his campaign for the Massachusetts seat in the Senate.

While it can’t be said for certain if Rep. Kennedy’s challenge and more established support for marijuana legalization led to Markey’s change of heart, it is a radical departure from his 40 year track record.

Throughout his time in Congress, the only pro-reform marijuana legislation Markey had cosponsored was to protect banks servicing marijuana businesses, to force the U.S. Department of Veteran Affairs (VA) to study the medical benefits of marijuana for veterans, and to prevent federal interference in state medical marijuana systems.

All three of these bills legislate for ending federal prohibition, as well as redressing some of the harms caused by the war on drugs.

While Markey has taken quite a jump in his support for marijuana reform, Kennedy has still not put his name to any legalization legislation. So far, he has only signed a marijuana banking protection bill, alongside bills requiring the VA to carry out marijuana studies and federal agencies to research the impact of state-level legalization.

Kennedy was also on the losing side back in 2016, when Massachusetts voters approved a ballot measure for marijuana legalization. Kennedy campaigned against the measure, while Markey, perhaps wisely, did not take a public position on it.

Now that he has signed onto a raft of marijuana legalization bills, Markey can now argue that he is more proactively supportive of marijuana reform than Kennedy.

Whether Markey is successful remains to be seen. But if the past is a reliable indicator then he could take heart from Sen. Dianne Feinstein’s (D-CA) maneuvers in 2018.

She had a long history of opposing drug policy reform, yet in the midst of a reelection campaign against the avowedly pro-legalization California State Sen. Kevin de Leon (D), she decided to cosponsor legislation to protect all state-legal marijuana programs from federal interference.

Once reelected, she quietly removed her name from a new version of the bill this year.

Whatever their motivations, what is clear is that supporting marijuana reform is becoming a prerequisite for Democrats going into elections.

Now, we only need to determine whether a pro-marijuana reform stance is a candidate’s genuine, principled position, or one they adopt as a calculated political move, and which they could easily dispose of.