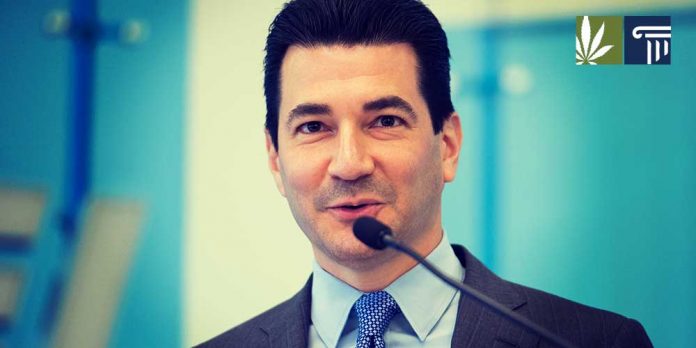 In an interview on CNBC on November 16, Dr. Scott Gottlieb, the head of the Food and Drug Administration (FDA), said in reference to relaxation of marijuana prohibition: “Obviously it’s happening at the state level, and I think there’s an inevitably that it’s going to happen at the federal level at some point soon.”

He also pointed out that while the agency recently approved “compounds derived from marijuana,” “recreational marijuana doesn’t fall within our purview” and that there is no medical use for “botanical marijuana.” More specifically, Gottlieb said: “All the people who are making claims around botanical marijuana—medical claims around it and around its purported benefits—those haven’t been demonstrated.” It should not be a surprise that a doctor would not endorse smoking anything, but comments such as “haven’t been demonstrated” indicate a willingness to investigate the potential medical uses of marijuana-based drugs in the wake of the FDA’s approval of Cannabidiol, which is being marketed in the United States as Epidiolex. This willingness is stated more clearly in a separate interview on the same network on September 7, in which Gottlieb said: “There is a pathway for investigating the active ingredients in marijuana as safe and effective drugs, and that pathway is open to companies that do proper research.”

The Door’s Open to Investment

Gottlieb made his November 16 comments on a show called Squawk Box, which the network bills as concerned with “business, politics, investors and traders.” Gottlieb commented on marijuana after the show’s host raised the issue of the interest that alcoholic beverage businesses have in entering the marijuana market. (As Gottlieb speaks on the video, chyrons and screens report on the price of stocks of corporations such as Canopy Growth, Tilray, and Cronos.) Gottlieb went on to say that “I think there’s probably going to be a policy rec[ommendation] coming.”

In both interviews, Gottlieb makes it clear that “the door’s open” at the FDA to businesses that want to enter the regulatory process for cannabis-based medicines. (He also makes it clear that “botanical marijuana” is not something the FDA is considering.) In the September interview, he stated that “We have at least 20 investigational new drug applications” already in process. He went on to say: “There is a proper pathway for doing the science to demonstrate these uses….And that’s where I would encourage sponsors to try to make their investments and spend their time.”

This guy says federal marijuana action is an “inevitability”. ⠀ ⠀ Head of the FDA, Dr. Scott Gottlieb, made it clear that their "door is open” to businesses that want to enter the regulatory process for cannabis-based medicines. ⠀ ⠀ (Though, “botanical marijuana” is not something the FDA is considering, as they find it to have “no medical use”.)⠀ ⠀ #fda #weed #cannabis #weedstagram #cannabiscommunity #marijuana #dank #ganja #thc #cannabisculture #maryjane #high #dabs #kush #highlife #highsociety #bud #ganjagirls #pot #smokeweedeveryday #medicalmarijuana #mmj #medicalmarijuanapatients #medicate #maryjane #marijuananews #legalizeit #fueledbythc #cbd #cannabisheals

Marijuana remains difficult to research in the United States, due to its legal classification as a dangerous drug with no medical value. In other countries, however, research, much of which is sponsored by American companies, is progressing. In an article titled “The Outsourcing of American Marijuana Research,” for example, Newsweek magazine describes how medical research into marijuana-based medicines is flourishing in Israel. The article describes how in 1992, researcher Raphael Mechoulam discovered the mechanisms in the human brain and body that are receptive to cannabinoids. It turns out that the brain makes its own endocannabinoids and has receptors for them. Research into the endogenous cannabinoid system is being conducted to alleviate such conditions as Alzheimer’s disease, multiple sclerosis, and schizophrenia. Research such as Mechoulam’s has led to the approval of marijuana-based drugs, and, as Gottlieb stated in interviews, the door is open to finding more medical uses for cannabis. While doctors are never likely to approve of smoking, the FDA may soon be approving more cannabis-based drugs.

What do you think? What sort of cannabis medicines will be getting market approval soon? Leave a comment below.