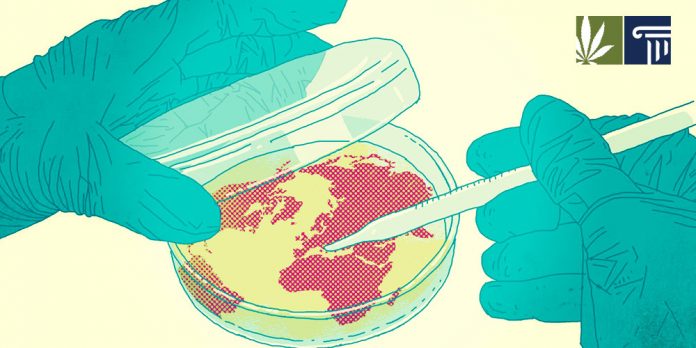 The international community is preparing for a vote that could lift certain restrictions on cannabis, and it seems the US federal government is concerned the vote could strengthen the arguments of marijuana legalization advocates domestically.

At least that’s the take from a recently released government document, though its authenticity is yet to be verified. The document focuses on the cannabis policy recommendations made by the United Nation’s (UN) World Health Organization (WHO) last year. These included rescheduling cannabis so it’s no longer considered a controlled substance under international law, and reclassifying several cannabinoids. Marijuana is currently a Schedule IV substance under the terms of a 1961 international treaty, understood as the most strictly-controlled classification. Confusingly, in the US Schedule I is the strictest category.

The UN’s Commission on Narcotic Drugs, which comprises 53 nations with rotational membership, was set to vote on the WHO’s proposals later that year, but this was postponed to allow member states more time to review the recommendations. Now it looks like the vote could happen within a couple of weeks.

And if the released document is legit, it appears the federal government is worried what the ramifications may be if the WHO’s proposals pass. For one, it may lead people to think legalization will soon follow.

“It is possible that civil society, the media, and the general public will view deleting cannabis from Schedule IV as a first step toward widespread legalization of marijuana use, especially without proper messaging,” the document states.

The document notes that following the WHO’s recommendations could lead to more research and be a “benefit to the advancement of collective knowledge of both the therapeutic utility as well as any associated harms.”

At the same time, the document seems concerned the public may believe, owing to the WHO vote, that the Schedule IV classification presents “inherent barriers to research,” and that the status quo is therefore “incompatible with such scientific research.”

This reads as little more than window-dressing on the US government’s part. Whether reclassification is beneficial to scientific research is clearly of less concern than managing public perception of the issue. The US government’s shallow stance rankles with US Air Force veteran and cannabis legalization advocate Michael Krawitz, given the WHO are far from putting forward a pathway to legalization.

“These recommendations—even if we passed them all as they’re presented—would not take us any step closer to legalization. It is not a step toward legalization, it’s a step toward rectifying an issue in the treaty,” he said. “This is all about correcting the record, removing some of the misinformation that was in the record on cannabis.”

“From my perspective, working on the inside of this, what it would really do is just help patients and it would ease government workload,” he said. “Governments are going to have less documentation to fill out, less of a bureaucratic burden to deal with dealing with cannabis. It should allow for more research and it should allow for insurance coverage of medical cannabis products.”

The document acknowledges the WHO’s point that marijuana was classified as Schedule IV without due research, but suggests that instead of removing it, the WHO could remind countries that “even Schedule IV listings do not prohibit scientific research.” The document further calls on the WHO to “remove unnecessary barriers to research wherever possible, taking into consideration the need for controls to prevent diversion and other illicit activity.”

Given the actions taken by the US government, you wouldn’t know that marijuana’s Schedule IV status isn’t a barrier to research. The Justice Department is fond of citing the international classification when pressed to expand access to marijuana for researchers. The Drug Enforcement Agency has been saying it will authorize additional grow centers since 2016, but has dragged its heels, blaming international law for the hold-up. A coalition of scientists are now taking the agency to court over the hold-up.

“Telling other countries that the treaty doesn’t stand in the way of research—that you should be able to easily research cannabis given the treaty status—it’s a bald-faced lie,” he said. “I’ve been up against the DEA three times in federal court now, and each time, they bring up the treaty. Straight up, ‘this is why we have Schedule I in the United States is because of the treaty.’ They’ve made it damn clear that we will never reschedule cannabis.”

President Trump’s administration has twice asked Americans to submit their thoughts on the WHO’s rescheduling proposal. Thousands responded, mainly to urge the government to throw its weight behind the measure.

The impact of international treaties on domestic law is far from clear, but if the WHO recommendations pass it could encourage a new wave of countries to consider descheduling marijuana. At the very least, if the UN’s Commission on Narcotic Drugs votes to remove restrictions on marijuana, the US government won’t have anyone else to blame for their inaction on cannabis reform.