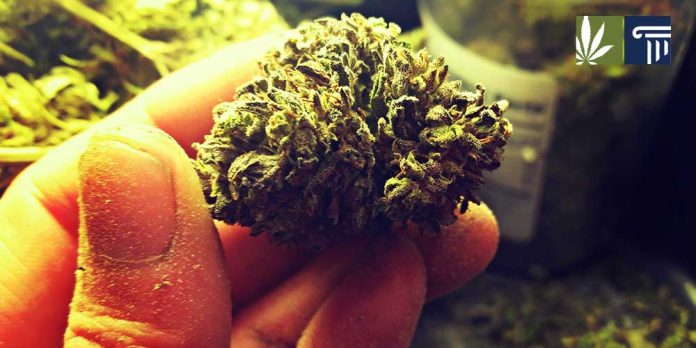 With Indiana holding firm on marijuana prohibition while its neighboring states enact reforms, the Midwest could be heading for a showdown between legal and black cannabis markets.

Michigan legalized recreational marijuana last year, and is expected to create a market that will rival that of Colorado and Nevada by 2023.

Meanwhile, Ohio opened its first medical marijuana dispensary earlier this year, while larger cities in Kentucky are pressuring police to hold off on arrests for cannabis possession.

This leaves Indiana as the sole state in the region to resolutely stick with the line of federal prohibition. Possession of less than 30 grams of marijuana is considered a misdemeanor punishable by as many as 180 days in jail and a $1,000 fine on a first offense.

Gov. Eric Holcomb sees no reason to change the status quo any time soon. He believes that state legalization should come with federal legalization, and is also convinced that police officers in Indiana are up to the task of enforcing prohibition at a time when volumes of legal marijuana smuggled in from neighboring states is likely to increase.

“We’ve got the best police force in the country,” Holcomb said to WISH-TV. “I may be a little biased when I say that, but by every indicator that we measure, they are just that, and they’ll continue to do their job and they’ll do it with distinction … regardless of policy changes that I think prematurely have been made in states surrounding us.”

As good as any police force may be, state-legal marijuana markets lead to increased black market activity in neighboring states where prohibition is still in effect.

This was certainly the case in Nebraska and Oklahoma, which became flooded with smuggled marijuana from Colorado shortly after it began legal sales. Law enforcement officials in those states even filed a lawsuit against Colorado asserting that “marijuana flow into neighboring states” is “draining their treasuries, and placing stress on their criminal justice systems.”

The complaint also indicated that 34 other states were experiencing the same problem, but the Supreme Court declined to hear the lawsuit.

For its part, law enforcement in Colorado has attempted to snuff out the black market. In the last few years, police have made about 500 felony arrests and seized around 100,000 illegal marijuana plants.

But stopping illicit exports to neighboring states is a huge task, one which top law enforcement officials in Colorado are skeptical as to whether it can be achieved.

“I’ve never seen the black market for marijuana as robust and as expertly cultivated, forgive that pun, as I have right now,” said Colorado District Attorney George Brauchler to Colorado Public Radio.

For now, Indiana has no particular provisions in place to deal with the increased volumes of marijuana likely to be coming in from Illinois, Michigan, and Ohio.

Indiana State Police Sgt. John Perrine said his officers are “not going to do anything different,” but “continue to enforce laws the same way we have done so in the past.”

This means we are likely to see more people, overwhelmingly people of color or from marginalized communities, suffer under the state’s punitive drug laws.