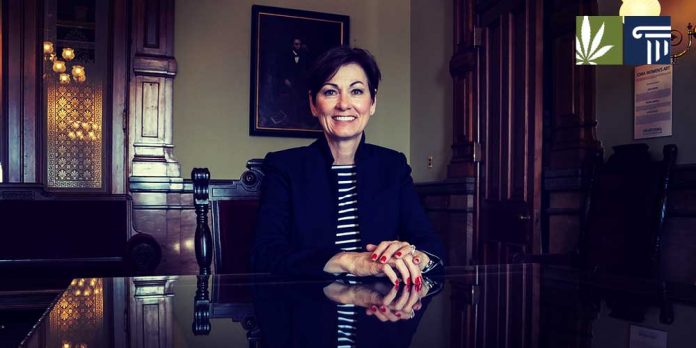 Iowa Governor Kim Reynolds is not ready to sign changes to the state’s medical marijuana program into law just yet.

Gov. Reynolds vetoed those changes Friday in a letter, saying “if approved, it would drastically expand Iowa’s medical CBD program far beyond its original scope of CBD-based treatments and could open the door to significant unintended consequences to the health and safety of Iowans.”

If Reynolds had signed the bill into law, it would have replaced the three percent THC limit on medical marijuana products with a 25-gram limit over 90 days for a patient or caregiver.  The veto comes after the Iowa Medical Cannabidiol Board opposed lifting the THC cap and actually recommended changing the limit from three-percent to 4.5% over a 90 day period.

Governor Reynolds applauded the Board’s work in her veto letter and warned that Iowa must take its time expanding the state’s medical marijuana program.

“The legislature was wise to understand that we are entering unchartered territory and could benefit from the Board’s expertise in navigating any potential expansion of the program.”

Other changes the law would have made include revising “untreatable pain” to “severe or chronic pain,” which would have given more people access to the program, expanding the definition of health care practitioner who can recommend treatment for patients, lifting the ban on felons becoming patients, and allowing for unlimited THC for patients considered terminal.

Iowa Behavioral Health Center Executive Director, Flora Schmidt, told the Des Moines Register her agency supported the increase in THC the new law would have allowed, but supported all other aspects of the bill.

“As addiction professionals who work with thousands of Iowans afflicted with substance use disorders daily, we simply could not support the elevated levels of tetrahydrocannabinol or THC that the Legislature proposed in this bill.”

Iowa State Senator Claire Celsi reacted sharply on Twitter saying “I’m very disappointed (actually quite pissed) that Governor Reynolds ignored the vast majority of people in Iowa who want the medical cannabis law modified to help more sick and suffering Iowans.  Her veto today was simply unconscionable.” Sen. Celsi also tweeted out a picture of a friend’s medications for chronic pain, and stated some of them could have been replaced by the law.

Another Iowa lawmaker vowed to make this a top priority in the next legislative session.

In her letter explaining the veto, Governor Reynolds said the 25-gram limit would allow a person to consume 277 milligrams of THC per day, which is “an amount higher than one would typically consume even with aggressive recreational marijuana use.”  She promised to keep working to find a solution.

“The health and safety of Iowans is too important for us not to get this right,” the governor said.