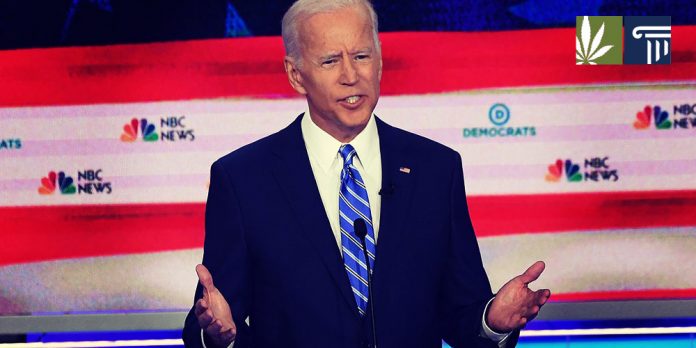 The third Democratic debate revealed the gulf between former Vice President Joe Biden and every other contender for the party’s 2020 presidential nomination on the question of marijuana.

While his opponents have all come out in support of marijuana legalization, Biden said during the event that cannabis offenses should be treated as misdemeanors.

“Nobody who got in prison for marijuana, for example—immediately upon being released, they shouldn’t be in there.” he said. “That should be a misdemeanor.”

What’s confusing about his position now is that he has previously set out a criminal justice plan which included marijuana decriminalization. And while he said that nobody should be incarcerated for non-violent crimes, many misdemeanor offenses can result in jail time.

NORML, a marijuana reform advocacy group, called Biden out on his record for expanding the U.S’s incarceration rate on Twitter as the debate unfolded.

Biden has faced a barrage of criticism since joining the field of Democratic presidential nominees for his role in pushing the 1994 crime bill whilst serving in the Senate, among other hard-line criminal justice stances he has held.

Sen. Cory Booker of New Jersey, another of the Democratic nominees, has been one of Biden’s most outspoken critics. He dismissed Biden’s criminal justice reform plan as inadequate and said back in July that the “proud architect of a failed system is not the right person to fix it.”

During the most recent debate, Booker focused on racial disparities in the criminal justice system.

“Our criminal justice system is so savagely broken. There’s no difference in America between blacks, whites and Latinos for using drugs or dealing drugs—but if you’re African American, you’re almost four times more likely to be arrested and incarcerated, destroying your lives. So much of this comes down to privilege,” he said.

Booker also laid out his plan to grant mass clemency for thousands of incarcerated Americans as a step towards repairing the “systemic racism that is eroding our nation,” which he believes is shown by the fact that “we have more African Americans under criminal supervision today than all the slaves in 1850.”

The issue of criminal justice reform during the third Democratic debate started with a question for Sen. Kamala Harris of California. The moderator asked her to explain her record as a state prosecutor and prior support for marijuana prohibition with her new position in favor of cannabis legalization.

“There have been many distortions of my record,” Harris said, adding that she was “born knowing about how the criminal justice system in America has worked and has been informed by racial bias.”

“I took on the position that allowed me, without asking permission, to create one of the first-in-the-nation initiatives that became a national model around people who are getting arrested for drugs and getting them jobs,” she said.

Following the debate, former Housing and Urban Development Secretary Julian Castro posted a tweet outlining the “bold ideas,” including marijuana legalization, he thinks are necessary to win the presidency.

While the issue of marijuana legalization was not especially prominent during the debate, having widespread reform discussed by political leaders on nationwide television is a significant step for the pro-reform movement.