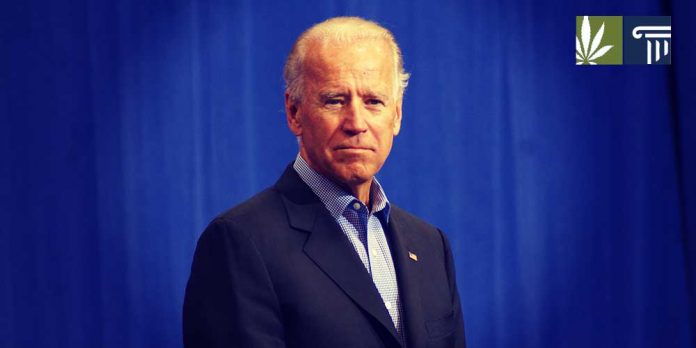 2020 Democratic presidential candidate Joe Biden is in favor of decriminalization, expungement of prior cannabis conviction records and allowing states to decide their own marijuana laws, but not full legalization.

A spokesperson for the former vice president said he also believes cannabis should be reclassified as a Schedule II substance, which is less restrictive than Schedule I, to make it easier to conduct research on the drug.

Legalization advocates have criticized Biden for his previously staunch opposition to reforming marijuana laws and his prominent role in the war on drugs.

Just two months earlier, Biden seemed to enthusiastically agree with a professor who claimed marijuana shouldn’t be used as a substitute for opioid painkillers.

But his representative said in a recent statement to CNN that he now “supports decriminalizing marijuana and automatically expunging prior criminal records for marijuana possession, so those affected don’t have to figure out how to petition for it or pay for a lawyer.”

“He would allow states to continue to make their own choices regarding legalization and would seek to make it easier to conduct research on marijuana’s positive and negative health impacts by rescheduling it as a Schedule II drug,” the spokesperson said.

It is somewhat of a significant change in Biden’s position on the issue considering that as a senator he was responsible for some of the harshest anti-drug policies, and denounced decriminalization and rescheduling as vice president in the Obama administration.

While this development is noteworthy, his stance is not nearly as progressive as that of other Democrats running in 2020, a majority of whom support legalization. Some of his presidential primary opponents have sponsored or cosponsored bills that would deschedule and remove cannabis from the Controlled Substances Act entirely.

“It’s not enough to casually support marijuana decriminalization. That’s a 2008 position,” Michael Collins, director of national affairs for Drug Policy Action, told Marijuana Moment. “Biden should recognize that marijuana must be legalized through the lens of social justice, with expungement and industry diversity as the key planks of any position. That’s what most of the other candidates support and it’s what the base wants so there’s no excuse.”

Erik Altieri, executive director of NORML, a cannabis advocacy group, also sees moving marijuana to Schedule II as only a “half measure.”

“Democratic primary voters in particular have demonstrated they want someone who will provide a progressive and bold vision for attacking the problem of mass incarceration being driven in no small part by the over 600,000 marijuana arrests made annually,” he continued. “Biden’s new comments illustrate a lack of vision and seriousness of approach that would be more at home a decade ago than in 2019. Joe: Do better.”

Biden first announced he would support decriminalization on May 14 at a campaign stop in New Hampshire.

Despite his declaration, Biden has not endorsed any legislative efforts to decriminalize cannabis so far, which casts doubts on whether as president he would sign bills similar to those sponsored by Sens. Cory Booker (D-NJ) or Chuck Schumer (D-NY), who support complete descheduling.