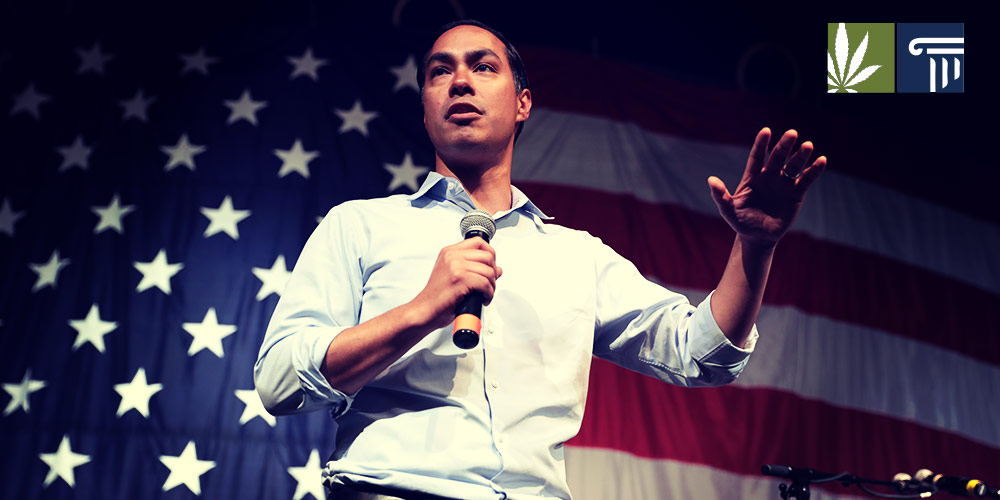 2020 Democratic candidate Julián Castro said he would legalize marijuana, expunge past cannabis-related convictions, and allocate funds to communities most harmed by the War on Drugs if he were elected president.

The former Housing and Urban Development Secretary made the pledge as part of his “First Chance Plan,” which seeks to prevent people from entering the criminal justice system and support those already serving sentences for non-violent offenses.

“Today more than 2 million people are incarcerated, and more than half a million folks are locked up for non-violent drug offenses, disproportionately young African American and Latino men,” he said.

“The human costs are staggering: families torn apart, billions wasted in taxpayer dollars, and the lost potential of a generation.”

Castro blamed punitive federal drug laws such as the 1994 crime bill, sponsored by fellow 2020 Democratic candidate Joe Biden, as enabling “the over-policing of communities of color, creating a system of mass incarceration, and a less just nation.”

He called for an end to the War on Drugs, and to instead treat drug abuse and addiction as “primarily public health issues, not seek to further harm the individuals and communities suffering addiction.”

The First Chance Plan, released at the end of last month, also contains provisions for taxing marijuana sales and ensuring that the money is invested in communities torn apart by prohibition.

“We will regulate the market and place a tax on all recreational sales, investing billions in revenue generated in the communities disproportionately harmed by the War on Drugs,” the plan reads.

The plan would also establish grant programs “that support minority-owned businesses and prioritize people directly affected by the war on drugs in receiving marijuana business licenses.”

While not endorsing the decriminalization of all drugs, the First Chance Plan would end sentencing disparities between crack and powder cocaine, and instigate a federal review of sentencing guidelines to avoid any other racial disparities in drug convictions.

Castro’s plan also focuses on pharmaceutical companies’ contribution to the country’s opioid crisis, arguing that they must be called to account “for their role in the suffering of millions. ”

Upon his election to the presidency, Castro said he would immediately seek to grant clemency to thousands of non-violent drug offenders locked up in federal prisons, as several other 2020 Democratic candidates have pledged to do. Castro would do this by invoking presidential clemency powers, whereby an independent panel would review cases and make recommendations on whether an individual’s sentence could be reprieved or pardoned.

“This is the single biggest step we can take to immediately reduce the unacceptable size of our prison population and set an example for the rest of the country that the era of mass incarceration must end,” he said.
While far-reaching, Castro acknowledges that ending mass incarceration requires more than just releasing some individuals convicted of non-violent drug offenses.

As such he proposes “a top-to-bottom audit of every federal dollar to find the ways in which the federal government subsidizes cruel and harmful practices in state and local prison systems, and support efforts to redirect resources towards restorative justice.”