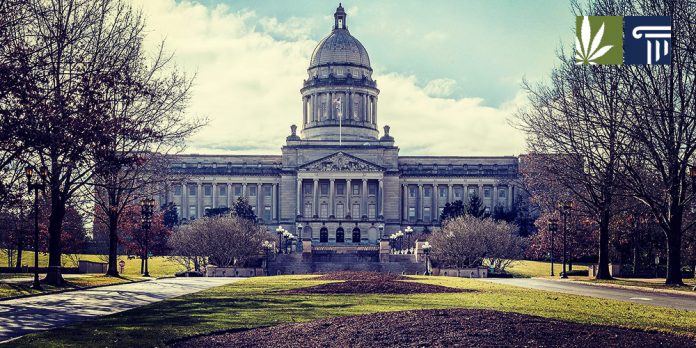 The Kentucky House voted in favor of a bill to legalize medical cannabis.

The bill, the first piece of cannabis legislation either Kentucky chamber has voted on, was approved in a 65-30 vote after its passage through the House Judiciary Committee. The proposed legislation now makes it way to the Senate.

The bill would allow patients with qualifying conditions to seek a doctor’s recommendation which could then be used to purchase medical marijuana from licensed dispensaries. Smoking marijuana would not be permitted, and it is not yet clear whether edibles will be allowed either.

That will be up to the state regulator, who would be responsible for crafting industry rules as well as setting the qualifying medical conditions for medical marijuana, though an approved amendment means chronic pain, epilepsy, multiple sclerosis and nausea must be included. A provision in the bill stipulates the state regulator must issue at least 25 medical cannabis dispensary licenses.

Medical cannabis sales from cultivators to dispensaries would be taxed at 12 percent. Eighty percent of this revenue would go to the general state fund, with the remainder split between local funds where medical cannabis businesses are active.

The bill, HB 136, was subjected to a raft of amendments prior to the full floor vote, making it a heavy piece of legislation and perhaps one of the most restrictive pieces of medical cannabis legislation seen in the US. One amendment makes the families of medical cannabis patients responsible for returning the patient’s marijuana to a dispensary in the event of their death within 10 days.

Lawmakers voted for an amendment allowing law enforcement access to sales data from dispensaries. An amendment to prohibit the sale of cannabis vaping products to those under 21 was included in the final bill. Minors cannot qualify for medical cannabis treatment, with dispensaries liable to sanctions if found in contravention of this. Only licensed physicians are able to recommend medical marijuana, with a passed amendment stating dentists, podiatrists and optometrists cannot do so.

“Patients across Kentucky are breathing a collective sigh of relief after this House vote, but they know that HB 136 will face significant challenges in the Senate,” said Matt Simon of the Marijuana Policy Project. “Now that 33 states have passed medical cannabis laws, it seems crazy that Kentuckians should have to risk criminal penalties if they use cannabis to treat a serious medical condition.”

Senate President Robert Stivers has had little time for medical cannabis in the past. Not so long ago, he recommended suffering patients to drink Kentucky bourbon rather than smoke marijuana. More recently though, Stivers conceded that medical cannabis legalization has a “narrow path forward” this year.

For a bill that is already quite restrictive, it remains to be seen what concessions or alterations those in the Senate may look for, or whether they may just try and sit on it without debate until the end of the legislative session on March 31, as happened with an earlier version of the bill last year. The latter tactic could be risky though in an election year given the overwhelming public support for medical cannabis among Kentuckians.

“I would expect that every line of this will be under intense scrutiny in the other chamber, and it could end up saying something rather different by the time we’re done, but the House champions will be fighting for the language that they passed and defending it,” Simon said.

At least if the bill passes the Senate, it doesn’t seem like the governor would be an obstacle. Gov. Andy Beshear campaigned on a platform supporting medical marijuana as part of the solution to Kentucky’s opioid crisis.

Kentucky is not the only traditionally conservative state inching towards medical cannabis reform. Advocates in Mississippi succeeded in putting the question to voters in the November ballot, while a medical cannabis bill passed the Alabama Senate last year and continues to make progress.