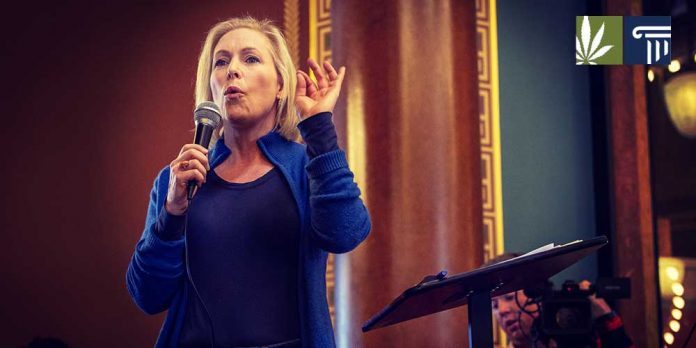 While nearly all of the 2020 Democratic presidential candidates have committed to descheduling marijuana at the federal level, few have said how they will do it and what a post-prohibition U.S. may eventually look like.

With so many candidates seeking the nomination, some are now going beyond the emerging consensus in the Democratic party that federal legalization of marijuana is the way forward, and beginning to flesh out the details of their plans.

U.S. Sen. Kirsten Gillibrand (D-NY) is one such candidate, having published a brief outline of her proposals in a post on Medium.

She described marijuana prohibition as “a continuation of the institutional racism that has defined our criminal justice system for decades.”

“Legalization is a criminal justice issue, a health-care issue, and an economic issue,” she continues. “It’s past time to make this happen at the federal level.”

After committing to “immediately deschedule marijuana as a controlled substance” if elected, Gillibrand went on to say that she would then establish a national framework to expand marijuana research, regulate and tax commercial sales, and ensure that economic benefits accrue to those communities “disproportionately harmed by marijuana laws.”

Here’s her plan, in summary.

The plan shares many of its proposals with the Marijuana Justice Act, a piece of legislation introduced to congress by Sen. Cory Booker (D-NJ), another 2020 candidate, and cosponsored by Gillibrand, as well as three other potential Democrat nominees: Kamala Harris (D-CA), Bernie Sanders (I-VT), and Elizabeth Warren (D-MA).

Booker and Sanders have also outlined their plans for federal marijuana legalization, and all three have strong ratings, based on their marijuana-related voting history, from NORML.

“Nothing proposed today can ever undo the devastating harm done to generations of communities and families of color by the War on Drugs,” Gillibrand wrote in the ending to her post. “But it’s long past time to start making this right.”