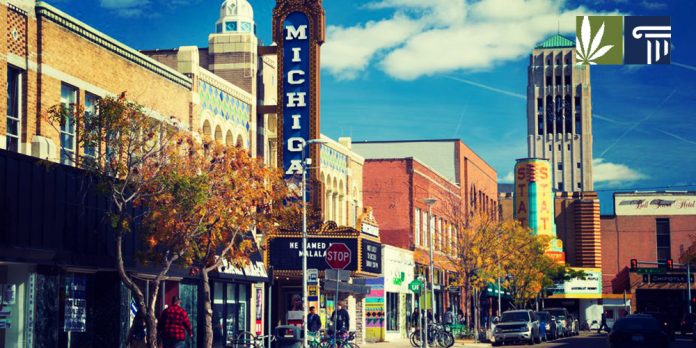 Michigan’s legal adult-use marijuana market began on December 1, 2019, but that doesn’t mean it’s now easy for would-be customers to get their hands on some bud.

Only five recreational cannabis stores are open for business across the state for the time-being, and four of those are located in Ann Arbor. The only other source is in Morenci, close to the Ohio border. This means that for most Michigans, the nearest cannabis store is up to a four-hour drive away.

And so far, getting to a store is often just the first hurdle. Long-queues outside cannabis dispensaries are a common sight, while on the first few days of legal sales many customers waiting in line were turned away because of licensing laws requiring stores to close by 9pm. Thankfully, those who had braved the cold were consoled by staff with complimentary pre-rolled joints and a “Willy Wonka golden ticket” permitting them to cut to the front of the queue on their next visit.

While sales have been strong, though nowhere near that seen in Illinois, a lack of supply is another issue. The small number of operating dispensaries currently have a limited selection and quantity of products, meaning customers can only buy so much at a time.

Some who work in the cannabis industry point to a lack of licensed growers as part of the problem. Robin Schneider, director of the Michigan Cannabis Industry Association, thinks this has been compounded by the Marijuana Regulatory Agency’s (MRA) surprise decision to launch the recreational market months earlier than expected.

“The state had indicated to us repeatedly and publicly that they would not be taking medicine from the medical marijuana program and transferring it into the recreational program, unless there was a surplus of product,” Schneider said to the press in November. ” … Our members, especially our retail members, have been reporting consistently for many months that there is a serious product supply shortage. The retailers are fighting over a limited supply of product that is very expensive … and so the access that patients have to medicine is already limited.”

But the main reason why legal weed in Michigan is still in short-supply for most folks is because most of the state’s cities and townships have banned recreational cannabis stores completely.

As many as 80 percent of municipalities opted out, even though voters strongly approved a marijuana legalization ballot measure more than a year ago.

Detroit City Council’s decision to prohibit legal cannabis stores until at least Jan 31, 2020, is particularly hard to swallow, since there are already 39 medical dispensaries in the city and its wider area.

State and local officials in Michigan have flitted between dragging their heels and rushing ahead when it comes to rolling out a legal adult-use cannabis market. Both recreational and medical customers have suffered.

And while there is still hope and cause for optimism – 42 recreational marijuana business licenses are in the pipeline – there are also many lessons to be learned.

As Schneider puts it, “Michigan is going to become the national model of how not to roll out an adult-use program.”