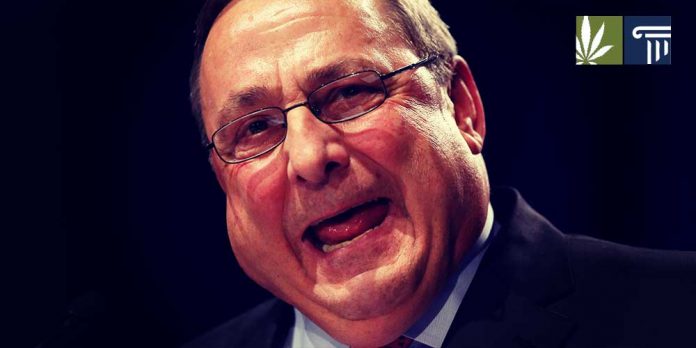 On May 2, Maine’s Democratic House and Republican Senate surpassed the necessary two-thirds vote to override Govenor Paul LePage’s veto of LD1719, a bill titled ‘An Act To Implement a Regulatory Structure for Adult Use Marijuana’. With the law now passed, Maine is expected to have a legal marijuana market in place as soon as 2019. In 2014, LePage stated that he would not interfere with legalization if it were passed by referendum.

In 2016, LePage opposed Question 1, a legalization referendum, making a video in which he claimed that marijuana could be deadly to children and pets, that “traffic deaths increased dramatically” in Colorado after legalization, and that people would buy and smoke pot at state fairs. (LePage’s video prompted journalist Rick Steves to issue a point-by-point rebuttal.) That year, LePage also found reasons to prevent passage of a bill that resulted from the referendum. When vetoing LD1719, LePage expressed an unwillingness to sign a bill in conflict with federal law.

Watch LePage’s video below, in which is outlines the supposed ‘threats’ of marijuana legalization.

Below, Rick Steves breaks down why LePage is wrong on every point made in his video.

This is not the first time that Maine’s legislature has overridden LePage. In 2016, it overrode 20 of his 33 vetoes. The ACLU has called his adherence to federal law into question as well, asking for an investigation of a possible violation of the Voting Rights Act in response to statements he made that could be interpreted as discouraging college students from voting. LePage has also garnered national attention, something unusual for a politician from Maine. Politico Magazine, for example, has called him “America’s Craziest Govenor,” citing his opposition to investment in wind power, his refusal to attend “Martin Luther King, Jr. Day breakfast,” and his extraordinarily rocky relations with the legislature. LePage has also called a federal judge an “imbecile” for allowing a lawsuit against President Donald Trump to proceed. In keeping with the Republican-sponsored tax cuts at the federal level, LePage has advocated for $88.2 million in cuts to the state’s tax income. It has been estimated that Maine’s new marijuana law may generate as much as “$325 million a year in revenue.”

The bill that survived LePage’s veto was the result of a bipartisan effort to craft an appropriate implementation of Question 1. Legislators and advocates debated such details as the tax rate for legal marijuana, whether social clubs could allow on-site consumption, and whether large-scale farming would be permitted. Ultimately, the legislature agreed upon a tax on growers of $335 per pound of flower or mature marijuana plants, $94 per pound of trim, $1.50 per immature plant or seedling, and 30 cents per seed. The new law also taxes retail sales at 10 percent and wholesale sales at an effective rate of 20 percent. In addition, the law prohibits social clubs and sales near schools. The Portland Press Herald quotes one member of the legislature—Republican Senator Roger Katz—as saying that “drafting the measure involved a process of compromise” that involved listening to stakeholders and examining the laws of other states so that Maine’s law could “be right in the middle.”

What do you think: Will Maine’s legalization plan prove popular? Leave a comment below.