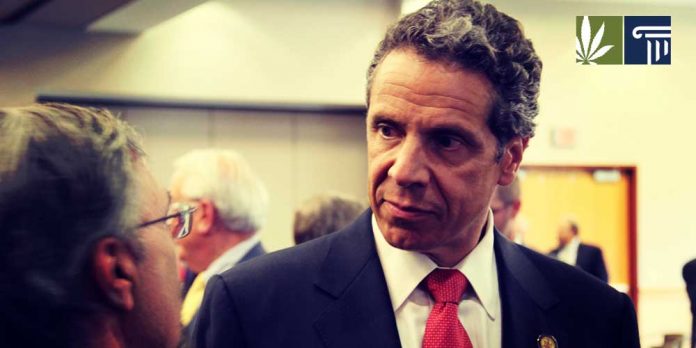 New York-based marijuana businesses urged Gov. Andrew Cuomo (D) in a policy statement to ban home cultivation of recreational cannabis around one month before he announced the details of his legalization proposal, which included such a prohibition.

Bar Washington State, allowing home grow marijuana has been a staple of all legal adult-use marijuana systems in the U.S.

The reasoning behind what is widely understood as a commonsense policy is that personal cultivation of marijuana ensures access for those who can’t afford retail prices or live too far from a registered dispensary. It is also seen as a matter of civil liberties for those who simply wish to try their hand at growing.

The policy document submitted by the New York Medical Cannabis Industry Association (NYMCIA) to Gov. Cuomo’s office includes some broad recommendations that are unlikely to be controversial to marijuana legalization advocates. These include the expansion of research into medical marijuana, and ensuring that communities disproportionately impacted by cannabis prohibition participate in the legal industry.

But in a chapter titled “The Fallacy of Home Grow”, the NYMCIA make a more specific case against home cultivation, arguing that it “creates a significant public safety and black market risk.”

To support their argument, the industry association presented five claims in the memo:

1. Home grow will make it impossible for the state to eliminate the black market.

2. Home grow will make it impossible for law enforcement to distinguish between legal and illegal products, thus frustrating enforcement efforts.

3. Home grow will undermine the state’s harm reduction goal of ensuring that cannabis sold in New York State is grown without noxious pesticides or other contaminants.

What interest does the NYMCIA have in banning cultivation?

These are, at a minimum, contentious claims that raise questions as to who is involved in the NYMCIA and what interests they may have in banning home cultivation.

Marijuana companies Acreage NY, Columbia Care, Etain, Medmen, PharmaCann, The Botanist, and Vireo Health were all listed as members of NYMCIA in the policy statement presented to Gov. Cuomo.

A spokesperson for MedMen said in response to questions about the company’s involvement in drafting the memo that it “respects the right of those who choose to cultivate cannabis for their personal use.”

Jeremy Unruh, director of public and regulatory affairs at PharmaCann, described the company’s position on the issue as continually evolving and “more nuanced than a simple approve/oppose.”

NYMCIA affiliates, as marijuana industry companies operating in New York, have an obvious financial stake in the marijuana laws that will emerge from the New York legislature.

Their opposition to home cultivation and possible influence on the position held by Gov. Cuomo is therefore of great concern to supporters of marijuana legalization.

“[T]o advocate against home cultivation given all we know about how it works in practice from the industry side really just is kind of despicable and illustrates their greed, that they’re willing to sacrifice individual freedoms for the slightest increase in their profits,” said Erik Altieri, the executive director of the National Organization for Reform of Marijuana Laws (NORML).

Altieri worries that industry concerns over home cultivation endangering consumers or complicating law enforcement activities are fronts to conceal their desire to have the New York cannabis market to themselves.

“We need to make sure that we have a check on the potential greed of the industry that we can already see in these early stages based on this advocacy document,” Altieri said. “We need to make sure that the market in New York not only begins to address all the harms caused by the war on cannabis but also is oriented toward the consumer and not large industry interests.”

Though the home grow ban is included in Gov. Cuomo’s budget proposal, advocates against his position may still have an opportunity to express their disapproval. Certain influential lawmakers such as Senate President Andrea Stewart-Cousins (D) have expressed doubts that marijuana reform will make it into the final state budget. This means that negotiations on separate legalization legislation could instead pass and result in a law permitting consumers to home grow marijuana.