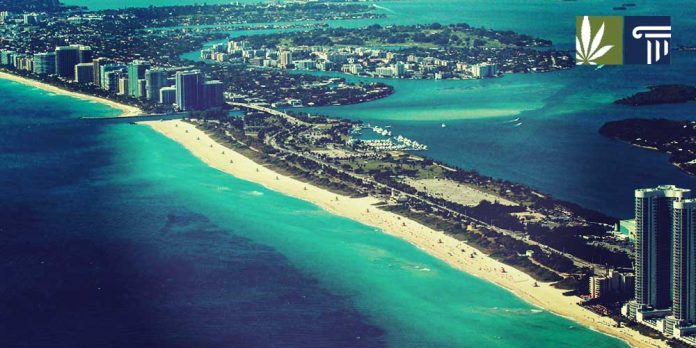 The legislation, introduced by Rep. Shevrin Jones (D), would render possession and delivery of 20 grams or less of marijuana and 600 milligrams or less of THC a noncriminal violation.

“We must restore justice to our broken criminal justice system,” Jones said. “For far too long, communities of color have been disproportionately impacted by laws governing marijuana, and we must end this injustice once and for all.”

Jones rallied against the long-term damage caused by criminalizing the possession of small amounts of marijuana.

“After being charged with possession, many Floridians feel the lasting impact as their student financial aid, employment opportunities, housing eligibility, or immigration status are adversely affected,” Jones said. “When we take away these foundational compounds of security, we’re capping people’s potential in life. That’s why I’m proud to introduce legislation to fix this problem.”

The move follows the success of marijuana reform activists in Florida securing enough verified signatures to have the Supreme Court review a measure to have a broader marijuana legalization initiative added to the state’s 2020 ballot.

For now though, state law in Florida for marijuana possession remains harsh, punishable by a $1,000 fine and up to one year in jail.

“Florida has one of the most punitive systems when it comes to simple possession,” said NORML State Policies Coordinator Carly Wolf. “Anything that can be done to lift their draconian policies is a crucial step in the right direction and we look forward to supporting Rep. Jones in this effort.”

While the prospects of legalization in Florida are less promising than in other states, certain jurisdictions in the state are pressing on with decriminalization measures. After the success of the city commission of Cocoa Beach in decriminalizing possession of 20 grams or less of cannabis, a lawmaker in Tallahasee is looking to replicate the approach.

The issue in Florida has been further complicated recently by the legalization of hemp through the 2018 Farm Act, though the confusion is not limited to the state. Law enforcement officials have had a hard time distinguishing marijuana from low-THC hemp, leading to the issuance of guidance recommending that officers take extra measures to ensure that individuals are not arrested for a legal product.

A further confusion arises from the text of Jones’ bill itself. One line of the text describes possession of 20 grams or less as a misdemeanor, contradicting other sections that describe it as a noncriminal violation. While it can be assumed that the line means to say that possession of more than 20 grams of marijuana would be a misdemeanor, Jones has still to clarify.