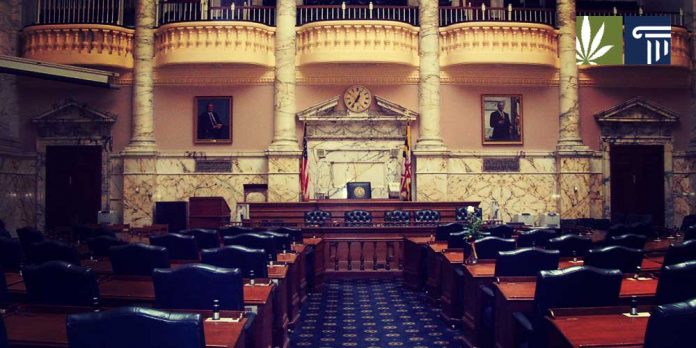 State lawmakers in the House and Senate filed legislation last week that would end cannabis prohibition in Maryland.

The bills, sponsored by Sen. William C. Smith Jr. and Del. Eric Luedtke, would make cannabis legal for adults 21 and older, and allow people to grow cannabis in their own home. Those with past cannabis-related convictions would have them automatically expunged.

Del. David Moon filed a constitutional amendment, HB0632, which would establish a similar system. If enacted, it would be placed on the ballot and decided by Maryland voters in November.

It remains to be seen whether these bills will be passed, but both the state House Speaker and Senate President have offered tepid endorsements for legalization and recognized that recreational legalization is an inevitability.

“Whether you support it or whether you don’t support it personally, I think that’s the future,” said Maryland House Speaker Michael Busch. “I think you’re going to see the country go to legalizing recreational marijuana and, you know, it’ll be much like overturning prohibition.”

Olivia Naugle, legislative coordinator for the Marijuana Policy Project, also argues that the time has come to end prohibition and to utilize incoming tax revenues for the public good.

“States around the country are rolling back prohibition and finding that regulating cannabis works,” Naugle said. “Maryland has the opportunity to learn from other states, determine what has worked and what can be improved, and develop a system that can serve as an example for the rest of the country.”

“A strong and steadily growing majority of Marylanders think it is time to end cannabis prohibition. One way or another, cannabis is going to become legal for adults in Maryland.”

A September 2018 Goucher Poll found 62 percent of state residents support making cannabis legal for adult use, up from 58 percent in 2017 and 54 percent in 2016. Only one-third of residents are opposed, according to the 2018 poll.

“These bills propose a sensible system in which cannabis is regulated, taxed, and treated similarly to alcohol,” Naugle said. “They would bring cannabis production and sales above ground so that they can be conducted by licensed, taxpaying businesses rather than criminal enterprises. Most importantly, this legislation would improve public health and safety, but it would also have the bonus of generating significant new tax revenue for the state.”

Legislators in Maryland are putting together a working group to decide how best to proceed with legalization, while Baltimore’s top prosecutor indicated recently that they would no longer be prosecuting marijuana crimes.

This suggests there is momentum behind the pro-reform campaign, but even if the proposed bills are passed, it is unclear whether Maryland Governor Larry Hogan (R) would approve marijuana legalization.

Hogan has said that legalization is worth looking into, but has also indicated that he does not believe now is the right time to be doing so.