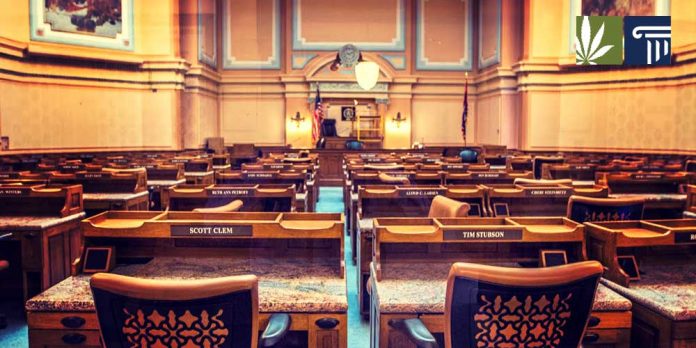 Wyoming legislators failed to consider bills for introduction that would have paved the way for legalizing medical marijuana.

One of the bills, the Medical Cannabis Act, House Bill 278, sponsored by Rep. Eric Barlow, R-Gillette, would have legalized medical marijuana in Wyoming for residents aged 18 years and older.

The act would have provided for patients to apply for and receive a medical marijuana card subject to the recommendation of a physician.

The bill would also have allowed for the cultivation, processing, and distribution of medical marijuana with a THC content between 3 and 15 percent by licensed producers.

The other act, House Bill 258, sponsored by Rep. Bill Henderson, R-Cheyenne, sought to create an implementation report in order to sketch out a timeline for legalizing medical marijuana.

The report would have outlined what medical conditions benefit from the use of marijuana, and offered recommendations on how the state could best regulate medical marijuana prescriptions and avoid misuse of the drug.

These bills were the last of the marijuana-oriented legislation that had been submitted in the 2019 legislative session.

The lack of progress is reminiscent of that faced by House Bill 234, sponsored by Rep. Tyler Lindholm, R-Sundance, which sought to significantly reduce the penalties imposed on individuals convicted of marijuana-related crimes.

Unlike HB278 and HB258, HB234 had made it past introduction but was quickly referred to the House Judiciary Committee. The measure failed to make it out of committee prior to the cut-off date for consideration by the Committee of the Whole and so ultimately failed.

The fate of these bills follows a long-standing pattern set against marijuana reform in Wyoming.

In 2016, a ballot initiative that would have allowed for the use of medical marijuana for residents over 21 didn’t get enough signatures.

That same year, marijuana supporters attempting to legalize the sale, use, and cultivation of marijuana through the Wyoming Liquor Division also failed to gather the required signatures for a ballot initiative.

In 2015, Rep. James Byrd, D-Cheyenne, attempted to lessen the penalties for possessing under one ounce of marijuana. That legislation was defeated in the House 38 to 22.

A 2017 bill introduced to the House would have reduced penalties for first-time offenders caught with three ounces of marijuana or less to a maximum $200 fine and 20 days in jail. The current maximum penalty is a $1,000 fine and/or up to one year in prison.

According to Nate Martin, director of Better Wyoming, a politically progressive advocacy group, the measure failed as a result of interference from the Wyoming Association of Sheriffs and Chiefs of Police (WASCOP).

Martin said that WASCOP pursued so many changes to the bill that time eventually ran out and supporters reportedly lost interest. As reported by County 17, Martin went on to characterize WASCOP as a group of lobbyists who promote opposition to marijuana law reform through their ongoing “No Debate” campaign.

Martin’s claims were described as “inflammatory and inaccurate” by Byron Oedekoven, WASCOP executive director, who had been Campbell County Sheriff from 1987 to 2004.

Oedekoeven said that WASCOP’s role was an advisory one and that the organization did not engage in lobbying.