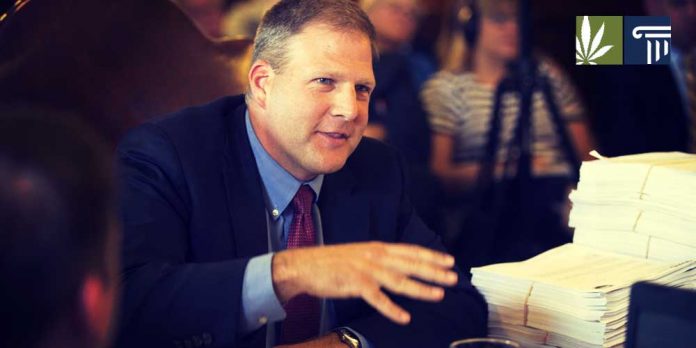 Chris Sununu, the governor of New Hampshire, was reelected on November 6 with 53 percent of the vote. He has consistently opposed legalization of cannabis. His opponents were Molly Kelly, a Democrat, who received 46 percent of the vote, and Jilletta Jarvis, a Libertarian, who garnered 1 percent. In their campaigns, they both supported legalization.

Sununu comes from a family of politicians. He is the son of John H. Sununu, who served as Chief of Staff under President George H. W. Bush, and brother of John E. Sununu, who has represented New Hampshire as a congressman and senator. The family name traces back to Lebanese and Palestinian immigrants who arrived in the United States early in the 20th century.

By Republican standards, Sununu is a moderate on some social issues. For example, he supported the Log Cabin Republicans, the party’s best-known LGBT affiliate, and he has said he would not send troops to the border to enforce the “zero-tolerance” immigration policy of President Donald Trump.

On the issue of legalization, however, Sununu has consistently taken a hard line, although he did sign a decriminalization bill in 2017, something the governor before him opposed. Sununu’s recent remarks to the editorial board of Seacoast Media Group, however, make his opposition to legalization clear. He said that legalization in Colorado has led to an increase in the black market, that it is “terrible that the Democratic Party” has supported legalization, and that “recreational marijuana is just big tobacco 2.0,” having billions to spend on making itself part of American culture. (According to nhnotforsale.com, two big tobacco companies donated a total of $25,000 to Sununu’s campaign.) In January, when a legalization bill cleared the House, Sununu made clear that he would veto the bill if it should reach his desk, saying that the state was in a drug crisis.

In a poll conducted by the University of New Hampshire in 2017, “more than half (53%) of New Hampshire adults” agreed with his statement at least in part, saying that drug abuse was the most important problem facing the state. Those polled evidently disagreed on which drugs were the problem (or whether prohibition is the solution), however, since “more than two-thirds (68%)” strongly or somewhat support legalization. This number represents a significant change from 2013, when the number of those who supported or opposed legalization were about equal. In addition, about 55 percent of those recently polled thought that marijuana should be legalized, taxed, and regulated like alcohol.

Although Sununu’s opposition to legalization may not be affected by poll numbers, other recent developments may also influence him and other political leaders in the state. One is that New Hampshire borders Canada, Maine, Massachusetts, and Vermont, where recreational marijuana is legal. And in neighboring Maine, a Democrat, Janet Mills, has succeeded Gov. Paul LePage, who opposed legalization. Mills has endorsed legalization if “properly implemented.”

First on the list of recommendations: call it cannabis. On this issue, New Hampshire already has some experience. It has what it calls a therapeutic cannabis program, with 4,753 qualifying patients.

What do you think? Will New Hampshire’s legislators pass a legalization bill? Will Sununu veto it? Leave a comment below.