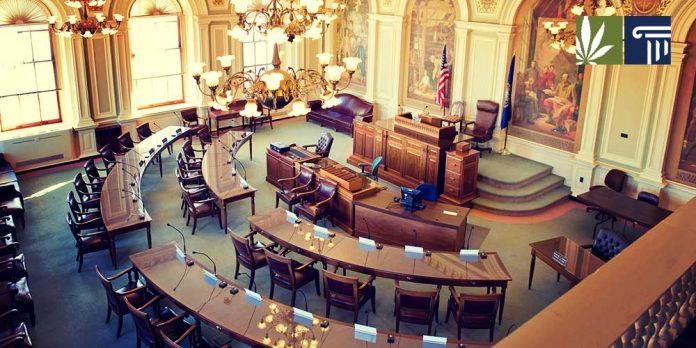 The House voted 209-147 in favor of the bill that would legalize possession up to 1 ounce, or 28.35 grams, and permit adults to grow up to six plants. The measure also provides for setting up a commission that would license and regulate an industry said to potentially be worth $33 million per year.

The bill now passes to the Ways and Means Committee, where it will likely be approved before receiving another House Vote and then finally moving to the Senate.

“I know change is hard. It’s a little scary,” the bill’s sponsor, Democratic Rep. Renny Cushing, said to lawmakers before the vote. “But I think now is the time that New Hampshire makes the transition from prohibition to real legalization, taxation, and regulation.”

Previous efforts in New Hampshire have stalled, but both the House and Senate are now controlled by Democrats who added marijuana legalization to their platform last year.

But support in the House and Senate may not be enough. Republican Gov. Chris Sununu remains committed to vetoing legislation for recreational marijuana reform, according to Benjamin Vihstadt, his spokesman. Sununu sides with law enforcement and public health officials who say “now is not the time for the recreational legalization of cannabis in New Hampshire.”

Though the Feb. 27 vote falls short of the two-thirds majority required to override the governor’s veto, Cushing said that momentum is on their side and that the bill will eventually become law.

“I’m confident that the force of history is with us,” he said.

Opponents of the bill took issue during the Feb. 27 debate with the potential impacts of marijuana legalization on health, road safety, and the dangers of marijuana as a so-called “gateway-drug.”

“Marijuana commercialization is wrong for New Hampshire’s young people, our communities,” Democratic Rep. Linda Harriott-Gathright said. “Allowing Big Marijuana into New Hampshire will allow this major industry to manufacture, sell and market an addictive substance to our kids, setting them up for long-term health problems.”

“We are not going to solve our drug crisis by legalizing more drugs. This bill creates far more problems than its worth,” he said.

Supporters of the bill argued that health concerns pertaining to marijuana are exaggerated.

“I don’t share my colleagues’ concern about cannabis. … I know we are dealing with the opioid epidemic but this is not that — not even close,” said Democratic Rep. William Pearson. “Rather, I would compare cannabis to coffee or sugar.”

Supporters in the House also said that legalization would eliminate the criminal market for marijuana, regulate and tax transactions, and ensure that marijuana products are safe and reliable.

Ten states have already recreational marijuana, while New York and New Jersey among others are considering it in 2019 legislative sessions.