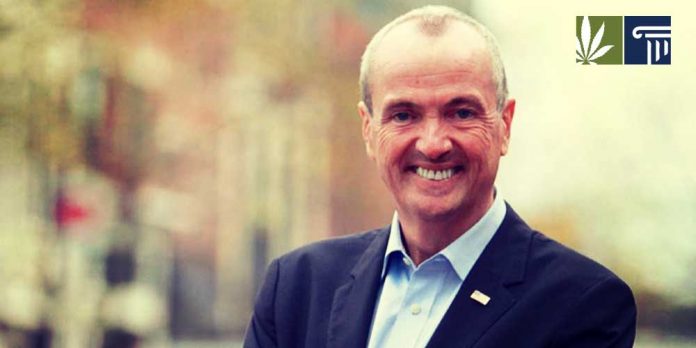 Governor Phil Murphy of New Jersey is a study in contrasts. He amassed a great fortune working for more than twenty years at Goldman Sachs, but besides being a Democrat, he supports some issues more dear to the progressive/liberal wing of the party than the moderate one. Murphy has said the financial sector is under-regulated and that the crash of 2008 should have resulted in some high-level prosecutions. He also supports progressive taxation, a $15 minimum wage, gun control, and protecting the environment, along with legal marijuana. In a recent speech, he lamented the disproportionate effect that the War on Drugs has had on people of color. He also criticized the high cost of prosecution and punishment for low-level marijuana offenses. According to Murphy, this situation is the primary reason for supporting legalization.

Murphy succeeded Chris Christie in January 2018. Christie, who because of term limits could not run for governor again in 2017, is well-known for opposing legalization. He once said, “Never, as long as I’m governor” in regard to legalization, citing a study that he claimed indicates that marijuana use leads to measurable differences in the size and shape of areas of the brain that govern motivation and emotion. One article about the study that Christie was presumably citing, titled “Casual Marijuana Use Linked to Brain Abnormalities,” appears in Northwestern Now and cites a study published in April 2014 in the Journal of Neuroscience that claims that statistically significant differences in the measurements of the areas of the brain in question were found in young adult marijuana users.

Christie was presumably not referring to an article published in the same journal in January 2015 with the title “Daily Marijuana Use Is Not Associated with Brain Morphometric Measures in Adolescents or Adults,” or as Project CBD summarized it, “Marijuana Use Does Not Cause Brain Abnormalities: An important study from the Journal of Neuroscience shows that marijuana use does not cause structural brain changes.” Murphy beat Republican Kim Guadagno in the 2017 race. Like Christie, she is a former prosecutor. In a debate on the issue, she said: “We do have a big problem with legalizing marijuana, and that is that the attorney general of the United States said that he would not accept that.”

Murphy has said that he is committed to passing legislation to legalize marijuana in his first year in office. In addition to legalizing and taxing marijuana, he proposes an increase in the state’s sales tax, a new tax on such e-busineses as AirBnB and ride sharing, and a modest tax increase on the state’s highest earners, which include himself. New Jersey’s legislature, which has a Democratic majority, is not entirely on board with legalization. According to NJ.com, for example, State Assembly Majority Leader Lou Greenwald is “‘solidly on the fence’” on the issue. Lawmakers have expressed reservations on the effect that legalization could have on young people. A group opposed to legalization, NJ RAMP, argues that legalization does not pay for itself with tax revenue, citing increases in social service costs. Jeanette Hoffman, a spokesperson for NJ RAMP, said: “The price of legalization as seen in other states—including greater youth pot use, more car crashes, and more arrests of minorities—is far to expensive for New Jersey communities.” According to the Drug Policy Alliance, however, such claims are misleading or overblown.

What do you think: Will marijuana be legal in New Jersey by 2019? Leave a comment below.