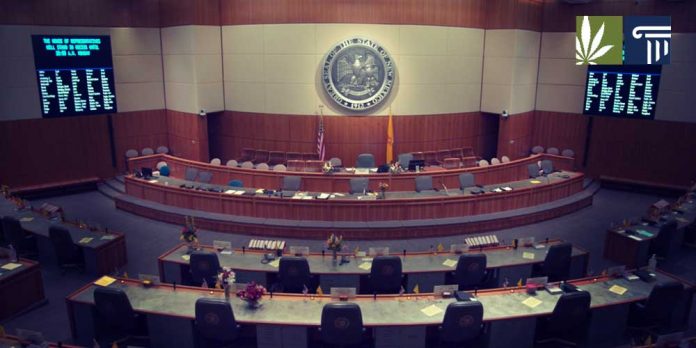 Legalized recreational marijuana could soon be coming to New Mexico after the House of Representatives narrowly passed a compromise measure earlier this month.

The compromise bill was then approved by the House 36-34. All Republican representatives voted against the bill, alongside 10 Democrats.

If signed into law, the compromise bill would allow adults 21 and older to possess up to one ounce of cannabis for personal use so long as they have a receipt for it from a licensed source.

Martinez concedes that this requirement was a difficult concession to make to Senate Republicans.

“You can face criminal charges if you don’t have a receipt or other proof of purchase on your person to accompany your cannabis for personal use,” Martinez said.

Retail sales would largely be operated by the state, as is the case with the regulation of alcohol sales in some parts of the country. In areas that do not have a state-run marijuana dispensary within 25 miles, privately owned outlets would be allowed.

Registered medical marijuana patients would be able to grow their own plants but home cultivation for recreational use would not be permitted.

The recreational cannabis market would be licensed by the state and regulated by the agriculture, health, and environmental departments. Recreational cannabis sales would face taxes of up to 17 percent generating $40 to $50 million dollars in tax revenue annually, according to lawmakers’ estimates.

Prior to the vote, Martinez spoke with local media on the need for marijuana reform.

After being narrowly passed, the compromise bill now heads to the Senate for approval, with only one week left in the legislative session.

Gov. Michelle Lujan Grisham (D) has indicated that she would support the legalization of recreational cannabis provided the bill safeguards the medical marijuana market for patients and ensures impaired driving and access by children issues are addressed.