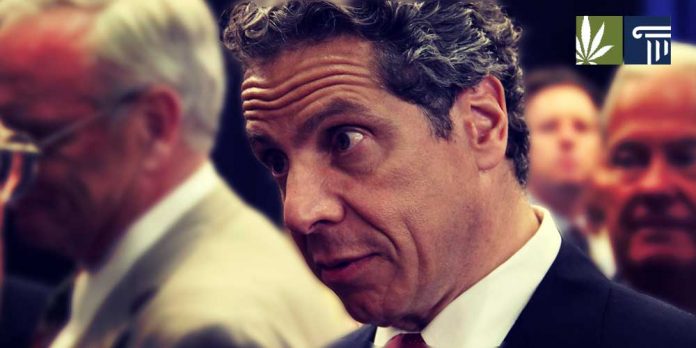 New York Gov. Andrew Cuomo seems to be backtracking on his pledge to support recreational marijuana legalization in the state.

After the failure to include adult-use legalization in the 2019 state budget last month, both lawmakers and the governor expressed commitment to passing a standalone bill before the current legislative session is over on June 19.

But while marijuana advocates are hard at work to advance it, the governor’s recent statements suggest he has given up on pushing the legislation.

Many of the bill’s proponents in the Legislature expected Cuomo to support their efforts. State Sen. Liz Krueger, one of the most outspoken legalization advocates, said that passing a standalone cannabis bill would require “the governor’s strong support and willingness to use political capital to get this done.”

Some of the legislators are reluctant to support the bill, which could threaten their political capital. While a budget vote is less conspicuous, a vote for a standalone bill will be seen as a vote for cannabis that could prove detrimental to legislators in less progressive districts in the upcoming election. But it is the only remaining option for legalization advocates in the state.

Yet Cuomo, rather than offering support, blamed state legislators for not securing enough votes themselves.

“When the Legislature starts to say, ‘We need the governor to get us votes,’ that’s legislative code for ‘We don’t have the votes,’” Cuomo said during a press conference on May 10.

“If [legislators] are starting to suggest that I need to twist arms, that’s a bad sign, because arm twisting doesn’t work and it means they don’t have the political support,” he added during a radio interview a few hours later.

But in the same appearance, he seemed to suggest that “twisting arms” was precisely what he did to push the marriage equality issue.

Michael Whyland, a spokesperson for Assembly Speaker Carl Heastie (D-Bronx), also questioned Cuomo’s explanation: “We are having thorough discussions of the proposal and are not aware of what the governor is talking about,” said Whyland. “We haven’t counted the votes and, with all due respect to the governor, the speaker has never needed him to twist arms.”

State Sen. Diane Savino, sponsor of New York’s medical marijuana legislation from 2014, thinks the governor is backing out of the issue of legalization, at least for the time being.

“I’ve worked with this man a long time now, so I know when he really wants to do something, he knows how to get down in the trenches and negotiate to a final solution,” she said. “I didn’t see that happening here, and I’m not sure why,” she added.

Savino suggested that the governor condemned his colleagues to fend off negative PR, should the bill fail. “He was going to take it on the chin if it didn’t happen,” she said. “And so, let the legislature take the blame. And that’s kind of the way it shook out.”

Though advocates give the bill little chance of passing, with or without Cuomo’s help, they are not giving up.

Earlier this month, four Assembly members proposed an expanded medical marijuana bill – a stopgap measure until recreational marijuana can be legalized. The legislation would make it easier to become a medical marijuana cardholder, legalize flower sales, facilitate cannabis studies and enable cannabis entrepreneurs to open new businesses. It is unclear when the proposal will advance out of committee.

Cannabis advocates will have another opportunity to garner support during the final Marijuana Justice lobbying day in Albany on May 29.