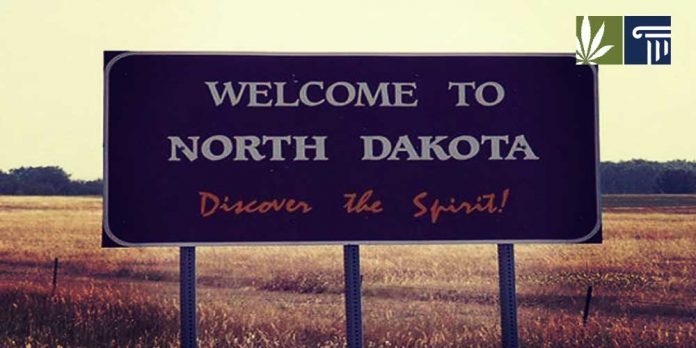 On July 10, supporters of a marijuana legalization initiative in North Dakota submitted more than 18,000 signatures to the secretary of state, a number well over the 13,452 required. Unless a substantial number of signatures are found to be invalid, North Dakotans will be able to vote on the initiative in November.

LegalizeND, the organization behind the initiative, cited a poll conducted by the Kitchens Group that indicates that a plurality of Nebraska voters approve of legalization, with 46 percent approving, 39 percent disapproving, and 15 percent undecided.  Medical marijuana was approved in the state in 2016 with 65 percent of the vote.

The initiative would make hashish, marijuana, and THC legal for use, sale, and possession by those twenty-one years old and older. The measure would also reduce the existing penalties for possession by those under twenty-one. The initiative legalizes paraphernalia used for marijuana, automatically expunges the record of an individual who has a drug conviction for a controlled substance that has been legalized, and creates an appeals process for those who believe their records were not expunged properly.

The Legalize ND website puts its central argument in favor of legalization cogently:

“Unlike legal substances such as prescription opiates, alcohol, Tylenol, and even water, marijuana has never caused a single medically documented overdose death in recorded history. Alcohol causes hundreds of overdose deaths each year, and in 2013 (the latest year for which data is available), the U.S. Centers for Disease Control and Prevention reported 29,001 “alcohol-induced deaths.” The British government’s official scientific body on drug policy concluded that [legally regulated drugs] alcohol and tobacco are “significantly more harmful than marijuana.” It’s time to stop penalizing Americans who use the safer substance.”

State by State, From West to East

Recreational marijuana is now legal in Alaska, California, Oregon, and Washington, as well as Colorado. East of the West Coast, however, the extent of legalization varies. Medical marijuana is legal in Arizona, Arkansas, New Mexico, Ohio, Illionois, Oklahoma, Montana, North Dakota, Minnesota, and Michigan, as well as several states on the eastern side of the country. Marijuana remains illegal in Idaho, South Dakota, Nebraska, and Kansas. In Utah, Wyoming, Texas, Iowa, and Missouri, along with many southern states, legal use is typically restricted to low-THC oils, typically CBD preparations.

Legalization is looking more likely in states where, not long ago, it seemed next to impossible. In Utah, Proposition 2 will appear on the November ballot. The initiative would legalize medical marijuana. Specifically, it would create regulations to allow people with certain conditions to buy and use medical marijuana and grow plants for personal use. The law would also establish a full regulatory and testing process. The initiative has polled very well, with about 75 percent in favor of passage. And in Oklahoma in June, voters approved State Question 788, legalizing medical marijuana in the state. And in another red state, the Missouri Marijuana Legalization Initiative may appear on the ballot in November, and polling is favorable. Finally, in Virginia, support for medical marijuana and for decriminalization is gaining ground.

What do you think? Will November see a few more states increase legalization? Leave a comment below.