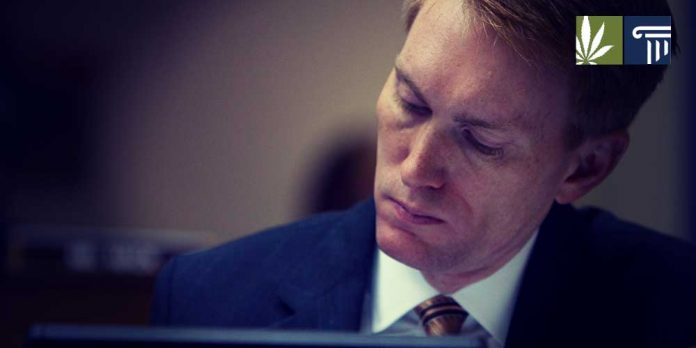 A religious group called Oklahoma Faith Leaders and U.S. Senator James Lankford of Oklahoma have come out in opposition to State Question 788, a medical marijuana initiative that will go before Oklahoma’s voters on June 26.

In a joint statement quoted by various sources, the Senator and the religious group claim that “This state question is being sold to Oklahomans as a compassionate medical marijuana bill by outside groups that actually want access to recreational marijuana.” “Most of us have seen first-hand the damage done to families and our communities from recreational marijuana use.” The statement also claims that passage of State Question 788 “would be harmful to the social fabric of Oklahoma.”

In a video post that appears on the Oklahoma Faith Leaders’ Facebook page, Senator Lankford said that marijuana “is an addictive drug,” and that it “impairs your thinking ability.” The senator has “no issues with” CBD, which is legal in Oklahoma, and suggests that there may be medical use for marijuana-based medicines, but he draws the line at smoking, pointing out that federal agencies and the American Medical Association hold that “there is no medical purpose in smoking marijuana.”

Proponents of Question 788 were quick to challenge some of the statements made by the senator and the religious group. News reports mention Jed Green, who is the director of a group called ‘Yes on 788’. He cites Genesis 1:29: “I give you every seed-bearing plant on the face of the whole earth and every tree that has fruit with seed in it. They will be yours for food.” He goes on to say, “So our question is, given that the ministry of Jesus Christ centered on healing the sick, without precondition, how would Jesus vote?” He went on to point out that Oklahomans, not outsiders, are the primary financial supporters of his organization, and that medical marijuana is frequently not smoked. Further, he claims that under Oklahoma law, if Question 788 passes, the legislature may address concerns about recommendations being handed out too freely.

A state poll reports that the initiative has the support of roughly 57 percent of voters, with nearly 30 percent in opposition. Under the provisions of the initiative, patients would pay $100 for a license or $25 if qualified for a reduced rate. Patients could possesses three ounces on their person, and they would be allowed to cultivate cannabis at home. The initiative also has provisions for the creation of a regulatory structure and business licenses for dispensaries. Sales taxes would pay for the regulation.

What do you think: Will Question 788 pass? Leave a comment below.