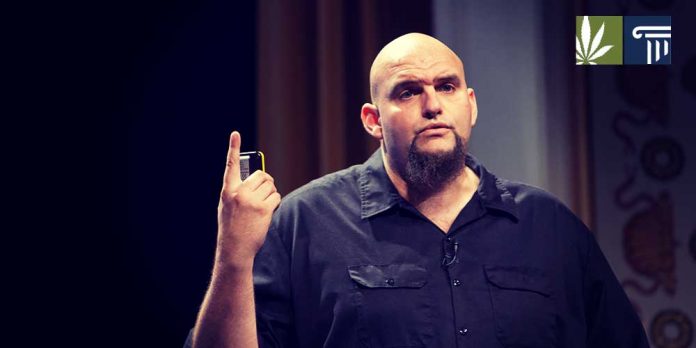 Earlier this year, Pennsylvania Lieutenant Governor John Fetterman embarked on a statewide listening tour to hear from voters on the issue of legalizing adult-use marijuana.

Since February, he has visited 50 of Pennsylvania’s 67 counties and at the end of April he presented his findings to the joint House and Senate Democratic Policy Committee.

He reported that the public overwhelmingly support legalizing marijuana, with only two of 50 counties opposed to legalization. In Leigh County, support was near unanimous.

Numerous national and statewide polls to gauge support and opposition to marijuana reform have been carried out and they largely correspond to Fetterman’s findings. Almost all of these surveys report broad public support for marijuana legalization.

Where they differ is on the size of the majority, with adult-use legalization usually standing at around 60 percent while some more limited form of legalization garners 80 percent.

Aware of the strong support for adult-use legalization among Pennsylvanians in the polls, Fetterman decided to begin his tour in conservative counties, where opposition to reform was likely to be strongest.

Still, according to Fetterman, only two counties registered minority support for adult-use cannabis legalization, with support generally falling between 60-70 percent.

Many of the concerns raised by residents in attendance at the town hall meetings will be familiar to marijuana reform advocates.

Some cited upticks in impaired driving as reason to oppose the move, even though data supporting the theory that legalization negatively impacts traffic safety is lacking. Others rolled out the widely debunked “gateway theory” as sufficient reason to keep marijuana prohibition in place.

How legalization may impact on minors and young people was another common point of concern, though its unclear how underage drug consumption would be more of a problem when regulated than it is currently under prohibition.

Advocates for legalization accompanied Fetterman on many stops of his tour, knowing such concerns would be raised, in the hope that they could clear up and challenge some of the well-worn myths and stigmas that are a barrier to marijuana legalization.

Though Fetterman’s tour underlines clear public support for adult-use marijuana legalization in Pennsylvania, Gov. Tom Wolf does not yet have a stance on the issue.

Still, lawmakers are taking steps towards legalization this year with several bills already pending in the legislature, including SB 350, that would legalize and regulate adult-use marijuana throughout the state.