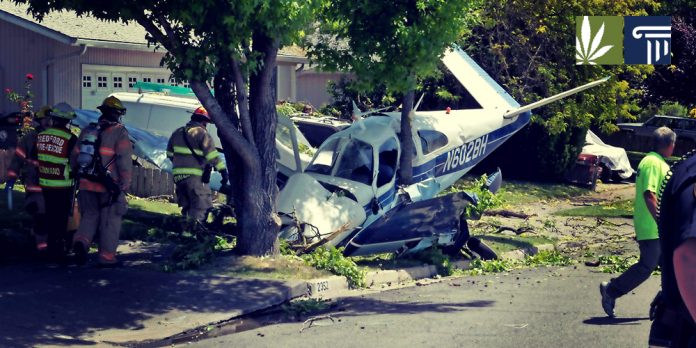 Two men from Idaho crash-landed a small private plane onto a quiet suburban street in Medford, Oregon after an engine malfunction forced them down.

While they only sustained minor injuries, this was not the end of their troubles.

The two were already under surveillance by the Medford Area Drug and Gang Enforcement (MADGE) task force under suspicion of transporting narcotics over state lines.

Sure enough, authorities arriving at the scene found a stash of 5.65 pounds of cannabis oil, 10 doses of LSD, and more than $1,000 in cash.

The men were quickly whisked from the scene in handcuffs and now face federal drug trafficking charges.

As reported by the Medford Mail Tribune, the suspects are Boise residents Matthew Thompson and Zachary Moore. They were transporting their cargo from Idaho to Oregon, until the plane engine gave up and sent them hurtling towards Whittle Avenue, only yards away from residential homes.

After their arrest, local officers carried out a search of Thompson’s Boise residence and found a hash oil processing laboratory.

So, the duo now have a charge of manufacturing a controlled substance in addition to their trafficking count.

While federal prohibition remains in force and states take different approaches to marijuana reform, drug traffickers will continue to try and get their product across state lines in the hope of making a bigger buck.

And until we have full legalization, it makes sense to at least ensure the engine of your plane is on your side when the law certainly isn’t.