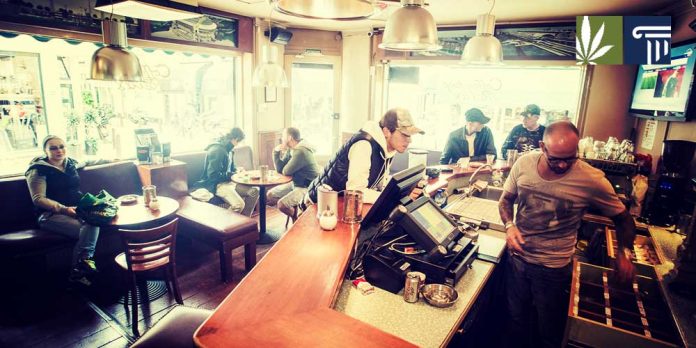 Licensed marijuana cafes could soon be coming to Massachusetts following a 3-2 vote by the Cannabis Control Commission in favor of a “social consumption” pilot program to be rolled out in up to a dozen cities and towns.

Marijuana reform advocates hailed the measure as a significant step toward integrating cannabis into the Massachusetts’ economy, and ensuring that it is easier and safer for people to consume the drug legally.

But there is still a lot of red tape to cut through before the pilot scheme can move forward. Legislators must make some adjustments to state law, and marijuana officials would need to write and approve comprehensive rules stipulating ventilation system requirements, dosing, and measures to prevent stoned driving.

The news is still positive for many tourists, renters, and those living in public housing who do not currently have a place to legally consume marijuana given that smoking is often banned in hotels and apartments, and illegal to consume in public spaces.

“Right now… they don’t have a place to go, or they’re going to unregulated events that are happening all around the state,” said commissioner Shaleen Title, one of the drafters of the proposal. “We’ve been asked by the consumers and by public safety officials to create a regulated [system] where there’s some safety measures in place, there’s some public health measures in place, and it will benefit the state to have those.”

The new policy would not just serve licensed premises, but also be open to event organizers to apply for one-day licenses permitting marijuana consumption for adults at, for example, concerts and weddings.

The commission decided to limit social consumption licenses for the time-being to small-sale, locally-owned cannabis farmers and processors, as well as minorities and other groups most harmed by drug criminalization.

Title said that one-off event licenses in particular could help would-be entrepreneurs get started in the state’s burgeoning marijuana market, which has so far been crowded by large, wealthy corporations.

The commissioners who voted against the measure, Britte McBride and Jen Flanagan, did so due to their concerns over impaired driving, with McBride arguing that on-site consumption must be delayed until more stringent penalties for stoned drivers are in place.

To ease impaired driving concerns, there would be a limit to how much a person could consume on-site, training would be provided to servers to detect impairment, and operators of on-site consumption premises would need to have plans in place for getting impaired patrons home.

This isn’t the first time the commission has attempted to authorize on-site marijuana consumption businesses. They approved a measure in 2018 that faced opposition from the office of Governor Charlie Baker for being a public safety risk. The new proposal is thought to stand a greater chance of success by being more cautious in its approach.

“Are they being cautious? Sure — but based on the feedback they’ve gotten and how difficult this is going to be regardless, it makes a lot of sense,” said Kamani Jefferson, president of the Massachusetts Recreational Consumer Council.

Gov. Baker seems to agree, saying he is open to the pilot program and that an initial limited rollout “makes a lot of sense.”

If implemented, Massachusetts will join Alaska, certain municipalities in California, as well as Denver and Las Vegas, in allowing social consumption of marijuana.

Under the provisions of the Massachusetts’ proposal, marijuana would be smoked outdoors in segregated areas open only to those 21 years and older. Operators of on-site consumption premises would be pre-screened by the commission before gaining approval.