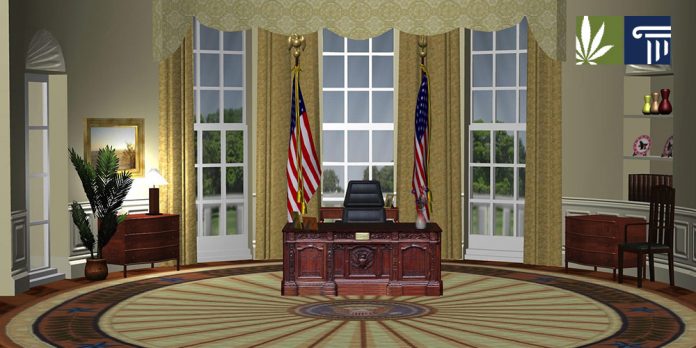 Whoever resides in the White House influences American attitudes towards marijuana legalization, according to a new study released in August.

“Findings indicate that confidence in the executive branch, fear of crime, and presidential drug rhetoric predict attitudes toward legalization despite controls for other factors such as estimated levels of marijuana use and arrests,” the paper, published in the journal Deviant Behavior, claims.

While it’s not surprising that the president of the United States has considerable power over public opinion, the researchers from Kennesaw State University and Old Dominion University were interested to find out just how far this influence extends.

To do so, the study’s authors reviewed data between 1972-2016 from the General Social Survey to get a sense of American public opinion regarding marijuana legalization. They also looked at reports detailing estimated marijuana use and arrest rates for marijuana-related offenses. Finally, they analyzed public presidential documents such as State of the Union (SOTU) addresses, speeches, messages and executive orders to determine the president’s position on cannabis and how important the issue is to them.

The researchers used a multi-level model analysis using several variables and control measures in order to determine any changes over the study period between 1972 – 2016. Here’s a rundown of their findings:

They extrapolate from their analysis that people may be more critical of fear-mongering in relation to marijuana.

“While attitudes toward legalization of marijuana have varied greatly over time, so has presidential rhetoric about marijuana and drugs,” the study’s authors wrote. “The lowest support for legalization is consistently found during President Reagan’s ‘Just Say No’ era. However, beginning around the election of President Clinton, a steady increase in attitudes favoring legalization…is observed. This project supports the hypothesis that presidential drug rhetoric is related to public opinion about drugs, and more specifically, about marijuana.”

The study does not include President Trump’s term within its scope. For now, his administration maintain somewhat of an indifferent stance and say they will leave marijuana policy for states to determine themselves.

If the findings of this new study are sound, it is likely that President Trump’s position will not decrease support for marijuana legalization among the American public.