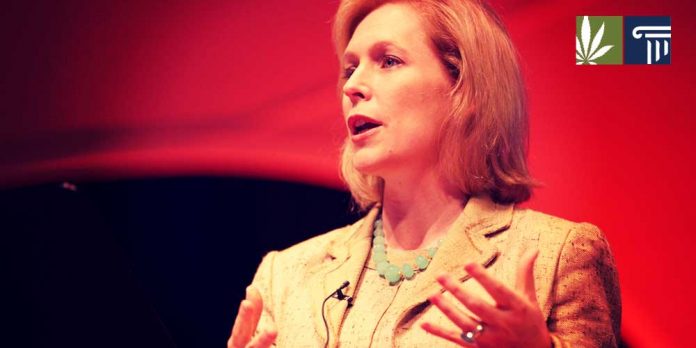 In the 2020 presidential election, the incumbent is a Republican with sagging poll numbers, leaving the Democratic field open. By mid-January, eight candidates had already announced themselves, and several more may follow. Some of them, including Sen. Kirsten Gillibrand (D-NY), fully support federal marijuana reform.

Gillibrand announced her candidacy on January 15. She has a record in the Senate of backing marijuana reform bills and has a grade of A from NORML. Her legislative record shows that she has embraced reform. Although she did vote against a reform bill when she was a member of Congress, she has since supported and co-sponsored numerous reform bills. These include the Compassionate Access, Research Expansion, and Respect States (CARERS) Act, which would have voided application of the Controlled Substances (CSA) Act “to any person acting in compliance with state law relating to the production, possession, distribution, dispensation, administration, laboratory testing, or delivery of medical marijuana.” She also supported the Marijuana Justice Act (MJA), which would have not only removed marijuana from the CSA, ending federal prohibition, but also cut federal funding to state prison construction in states that disproportionately enforced marijuana law. The Marijuana Justice Act also had expungement provisions.

The MJA and CARERS Acts were sponsored by Cory Booker, who has said he is considering running for president. Booker is an outspoken proponent of federal marijuana reform, including reparative justice and legalization.

We need to decriminalize marijuana.

The fight to pass the Marijuana Justice Act is about combating discrimination against communities of color. It’s about putting a stop to injustice. It’s about creating a fairer, more equal society.

Like Booker, Gillibrand is outspoken on social media regarding federal reform. For example, on January 13 she used Twitter to favor “Passing the Marijuana Justice Act to end the drug policies in our country that disproportionately target communities of color and reinforce systemic imprisonment of people of color.” And in November 2018: “We need to decriminalize marijuana.”

In addition to Gillibrand, Sen. Kamala Harris of California has announced her candidacy. As a senator, she also endorsed the MJA, effectively making her a proponent of federal legalization. She tweeted: “[M]arijuana laws are not applied and enforced in the same way for all people. That’s why I’ve signed onto @CoryBooker’s Marijuana Justice Act to make marijuana legal at the federal level. It’s the smart thing to do.” Harris also supported the SAFE Banking Act, which would have allowed state-legal cannabis businesses safe access to the federally regulated banking system.

In addition to Senators Gillibrand and Harris, Sen. Elizabeth Warren (D-MA) has announced she is forming an exploratory committee to consider running. Adult use is now legal in her state, and with its successful implementation she has evolved into a supporter of federal reform. Like Gillibrand, she has an A grade from NORML. She has supported reform legislation, including the SAFE Banking Act and the CARERS Act. She has also tweeted: “The federal government needs to get out of the business of outlawing marijuana. States should make their own decisions about enforcing marijuana laws.”

The federal government needs to get out of the business of outlawing marijuana. States should make their own decisions about enforcing marijuana laws.

The list of Democratic candidates does not end there. Richard Ojeda is a combat veteran and former state senator from West Virginia, where he successfully sponsored medical legalization legislation. Julián Castro, who has served as the mayor of San Antonio and the secretary of the Department of Housing and Urban Development, has said on social media:

The White House may crack down on recreational marijuana use–even in states where voters have approved it. That’s a mistake. The federal government should focus its resources on more serious crimes. Not only that, growing evidence from Colorado and other states suggests we can sensibly legalize marijuana use with reasonable controls in place. State voters should have that power.

The many Democratic candidates for president in 2020 have differing records on federal marijuana reform, but they collectively represent a significant step forward toward reform—including legalization and expungement—at the federal level.

What do you think? Will a Democrat win in 2020? What sort of federal reform would likely result? Leave a comment below.