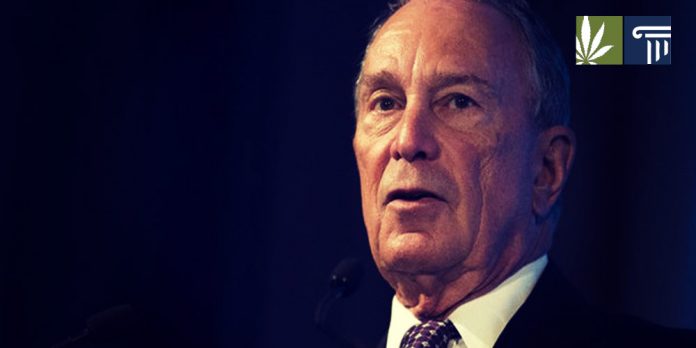 After flirting with the idea for years, former Mayor of New York City Michael Bloomberg has announced his bid for the US presidency in a crowded Democratic field.

The billionaire owner of the financial software, data and media giant, Bloomberg L.P, formally launched his candidacy for the 2020 Democrat nomination on November 24.

Back in March of this year, Bloomberg said he would not run for the Democratic ticket and instead urged the party to “nominate a Democrat who will be in the strongest position to defeat Donald Trump.”

That Democrat was supposed to be Joe Biden, but the former vice president’s inability to see off the challenges of Elizabeth Warren, and even Bernie Sanders, has reportedly prompted Bloomberg to step into the race.

Like Biden, Bloomberg has a long history of opposing reform to marijuana laws. But while Biden has adopted a somewhat softer stance on marijuana in response to bipartisan moves towards ending federal prohibition and an American public weary of punitive drug laws, Bloomberg earlier this year described marijuana legalization as “perhaps the stupidest thing anybody has ever done.”

Under his tenure as mayor, between 2002 and 2012, the NYPD made around 440,000 arrests for low-level marijuana possession. As the Drug Policy Alliance estimates, this translates to about one million hours of law enforcement’s time to process the cases.

The DPA’s report on Bloomberg’s time as mayor further notes that more individuals were arrested for low-level marijuana possession under his watch than under the combined mayorships of Ed Koch, David Dinkins and Rudy Giuliani.

These arrests hit a peak in 2011, in spite of the fact that low-level possession had been decriminalized since the 1970s. Bloomberg resisted attempts to rein in these arrest rates, and the consistent racial disparities they exhibited.

He denounced a 2011 state bill which would have made possession of 25 grams or less of marijuana an offense punishable by a court summons and fine instead of serving time in jail.

“This would encourage smoking in the streets and in our parks, reversing successful efforts to clean up neighborhoods and eliminate the open-air drug markets like we used to find in Washington Square Park,” a mayoral aide told The New York Times.

“Hot-spot policing that focuses on the most violent neighborhoods has led to dramatic reductions in violent crime. Marijuana arrests can be an effective tool for suppressing the expansion of street-level drug markets and the corresponding violence.”

At the end of his time as mayor, during his State of the City address in 2013, Bloomberg indicated he had became more open towards treating marijuana possession as a violation rather than a misdemeanor — a proposal put forward by New York Gov. Andrew Cuomo.

“We know that there’s more we can do to keep New Yorkers, particularly young men, from ending up with a criminal record,” Bloomberg said.

He said New York City would put Cuomo’s proposals into action straight away and that individuals would no longer be kept in jail overnight for low-level possession if they showed ID and passed a warrant check.

“It’s consistent with the law, it’s the right thing to do and it will allow us to target police resources where they’re needed most,” he said.

During his three terms as Mayor of New York, as both a Republican and an Independent, he presided over and defended the NYPD’s controversial stop-and-frisk policy which disproportionately targeted Blacks and Hispanics.

Bloomberg blocked two policing reform bills aimed at reducing stop-and-frisk searches, and instances of police misconduct. Bloomberg even went so far as to argue that those pushing for policing reform had the problem the wrong way round — that it was Whites who suffered under current police practices.

“I think we disproportionately stop whites too much and minorities too little. It’s exactly the reverse of what they say,” he said.

Though Bloomberg said he has tried and enjoyed cannabis, he is no ally of marijuana legalization. While other Democrat nominees present marijuana reform proposals of one kind or another, Bloomberg has spent most of this year doubling down on his opposition.

At a speech at the University of Toronto, he said that ending prohibition at national or local levels “doesn’t make sense at all.”

“To go and encourage people—to make it easier for people to engage in a behavior that has a significant possibility of damaging people’s health—is just nonsensical,” he said. “This mad, passionate rush to let everybody do things without any research just isn’t something we would do in any other way.”

While Bloomberg may change his tune once he hits the campaign trail, his extensive record on the issue as well as the discriminatory policing tactics he favored as New York mayor will give cause for concern to Democrats pushing for comprehensive criminal justice reform.

Unlike Biden, he has yet to show an evolution in his stance towards marijuana. Indeed, Bloomberg could yet prove to be more of a staunch opponent to marijuana legalization than our current president.