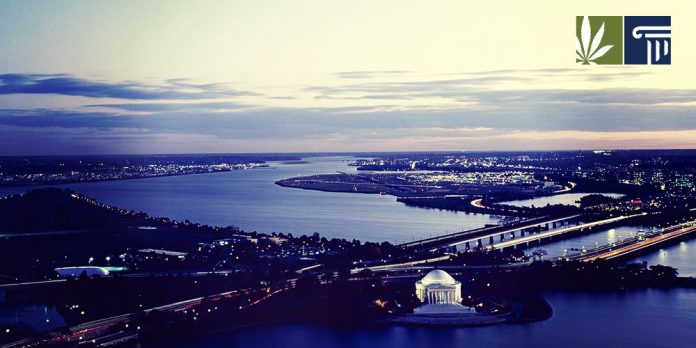 A coalition of advocacy and civil rights groups have sent a letter to leaders of both chambers of Congress demanding a legal retail marijuana market in Washington, D.C.

This is because congressional lawmakers have passed spending legislation each year with riders attached which prevent local officials from establishing a retail market using local tax income.

“It is critical that Congress support D.C.’s right to home rule and the ability to spend local tax dollars as they deem fit, especially in regard to the regulation and taxation of marijuana,” the coalition—including Drug Policy Alliance (DPA), ACLU of D.C., and NORML—wrote in their letter.

The House and the Senate appear divided on whether the rider should be included for the latest spending bill covering Fiscal Year 2020.

The House Appropriations Committee decided to remove the rider from their version of the spending legislation, which was passed in June. But the Senate has not changed its position from previous years.

Negotiators from both sides will come together at a bicameral conference committee to decide on the final version, before it’s sent off to the Oval Office.

The coalition urging congressional lawmakers to allow retail marijuana sales in the nation’s capital argue that the current situation is untenable and against the wishes of the majority of D.C. voters.

“Such a model would free up law enforcement resources to focus on reducing violent crime. It would also allow legitimate entrepreneurs to start businesses, create jobs and spur economic development.”

“Under these conditions—where marijuana is essentially decriminalized, but there is no legal access for adult use—D.C. has been left with a complicated grey market that is both unsafe and a far cry from the racial and economic justice promises of the Initiative 71 campaign,” said Queen Adesuyi, DPA’s national affairs policy manager.

“It’s time that Congress get its hands off of D.C. and allow D.C. Council, Mayor Muriel Bowser, and other relevant D.C. stakeholders to deliver on the promises of equity and justice for those disproportionately impacted by racially-biased enforcement of marijuana laws,” she added.

Mayor Bowser has been vocal in her criticism of lawmakers, arguing they are preventing local government officials from carrying out their obligations to the people of Washington, D.C.

She filed a bill to allow retail cannabis sales in D.C. in May, 2019, in order to circumvent the rider, but is supporting the coalition’s efforts to have it removed altogether.

Another issue for the bicameral conference committee negotiators to discuss concerns legislation passed earlier this year which protects states which have legalized marijuana from federal interference.

While Congress has assured protection for states with medical cannabis industries since 2014, only the House has expanded these protections to recreational marijuana programs in its latest rider. The Senate version still only concerns medical marijuana.