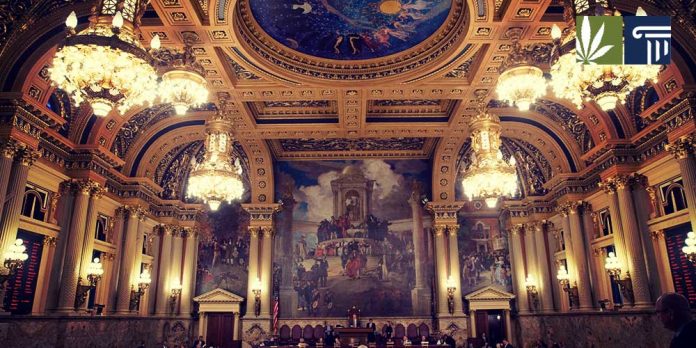 Democratic Rep. Jake Wheatley has brought forward an adult-use cannabis bill to the Pennsylvania House. He describes it as the state’s most comprehensive bill on the matter and “a bold call to move Pennsylvania onto the right side of history and into the 21st century.”

His bill, HB 50, would amend the Medical Marijuana Act and legalize the sale and recreational use of cannabis for adults, as well as levy a tax, estimated by the Democratic Pennsylvania Auditor General Eugene DePasquale to bring in upwards of $580 million.

Wheatley said that the funds raised would be directed toward affordable housing, after-school programs, and student debt forgiveness. The bill would also involve farmers in the state, “many of whom could save their family farms by converting their crops.”

The changes to the Medical Marijuana Act, introduced three years ago, coincide with the moves toward legalization in the neighboring states, New York and New Jersey. Pennsylvania’s Democratic Gov. Tom Wolf has declared willingness to consider allowing adult use of marijuana.

“More and more states are successfully implementing marijuana legalization, and we need to keep learning from their efforts. Any change would take legislation. But I think it is time for Pennsylvania to take a serious and honest look at recreational marijuana,” Wolf tweeted in December of 2018.

On Jan. 24, 2019, Lt. Gov. John Fetterman announced the launch of a statewide listening tour in all of Pennsylvania’s 67 counties, including major cities such as Pittsburgh and Philadelphia, rural and mountain communities, and those on the banks of the Delaware River and around Lake Erie. The tour is expected to start soon, though no dates have yet been set. Fetterman claims to be open to recommendations, as well as criticism.

“We want to make sure all Pennsylvanians have their say,” he said.

In the state’s capital, Harrisburg, the bill has 26 co-sponsors and other lawmakers have also voiced their support.

“The legalization of adult-use cannabis and the end of cannabis prohibition will free up law enforcement resources we need in a way that goes beyond what mere decriminalization would do,” said Democratic state Sen. Sharif Street in support of the bill. According to Street, legalization would not only help farmers in the state and raise funds for state priorities, but is also an issue of personal freedom.

“People should have the right to make responsible choices around cannabis just like they do with alcohol,” he said.

But the bill also faces considerable opposition. The Republican Senate Majority Leader, Jake Corman, called legalizing recreational use “reckless and irresponsible.” After the 2018 elections, Republicans outnumber Democrats by 19 representatives in the Pennsylvania statehouse, and the Speaker of the House, Republican Mike Turzai, has spoken out against legalization.

Turzai has argued that cannabis is a gateway to other drugs and, according to critics, was responsible for delaying the medical marijuana vote in 2016.

“He was like that with medical and we still got that passed,” said Steven Williams, a Democratic staffer with the Pennsylvania House of Representatives Finance Committee. He suggested that the bill could gain traction thanks to its social justice components that many see as necessary.

“There’s a lot of people who think that the time is now,” Williams said. “I think it’s fair to say that in this go-round we could see it progress.”

The state Senate voted in favor of a bipartisan medical marijuana bill 43-7 in September 2014. The House eventually passed a medical use bill 149-46 in March 2016, after months-long discussions. Pennsylvania became the 28th state to legalize medical cannabis for qualifying conditions a month later, after Wolf signed the law.

DePasquale’s July 2018 report suggested that Pennsylvania could reduce the cost of prosecuting minor drug offenses by millions of dollars, citing Philadelphia and Pittsburgh as examples of cities that have opted not to prosecute for the possession of small amounts of marijuana. The report estimates that legalizing and taxing adult-use cannabis could boost Pennsylvania’s economy by $1.66 billion.

“For too long we have allowed myths and ignorance to prevent a realistic and thoughtful discussion regarding the legalization of adult-use cannabis,” Wheatley said. “In 2016, we passed a law allowing medical cannabis in Pennsylvania. That law was the right step, the first step, but we need to do more.”