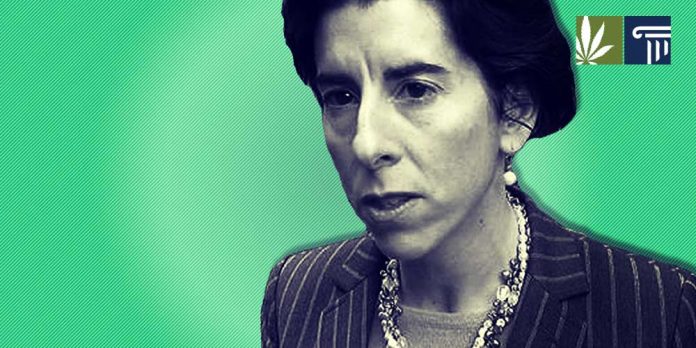 Blake Filippi, Republican minority whip of the Rhode Island House, announced his support for adult-use legalization on November 30. During a radio conversation, the legislator, who has supported a libertarian approach to social issues, said that marijuana “should be legal.”

Filippi also said that those who sell marijuana to children should go to jail, but that employers could set policy for themselves on how to deal with potential use by employees. Filippi’s announcement comes at a time when neighboring Massachusetts has begun sales of recreational marijuana. In addition, Maine and Vermont are implementing legalization, and the legislatures of Connecticut and New Jersey are also considering legalizing adult use.

The Concerns of Democrats

In many statehouses, it is Republicans who oppose legalization or are leery of it, and supporters of legalization are Democrats. In Rhode Island, however, Democratic leaders are the ones who have voiced worries about the effects of legalization. Speaking to the Providence Journal, Dominick J. Ruggerio, the president of the state senate, said he has “significant concerns, particularly with regard to workforce issues, enforcement around edibles, and impact on children. I will look to the experience in Massachusetts as legalization is implemented there, and proceed very cautiously as we continue to have this important public discussion.” The Journal also quotes the speaker of the House, Nicholas Mattiello, as saying that legalization “will also increase social costs and public safety concerns….We will have to determine what the net impact would be for Rhode Island in light of the legal sales in Massachusetts and other states.” Notably, neither Democratic leader said that he was entirely opposed to legalization but rather that its potential negative effects need to be addressed.

Rhode Island is a trifecta state, meaning that its house, senate, and governor’s office are all under the control of one party, the Democrats. Governor Gina Raimondo, who won a second term in November, advocated early in 2018 for increasing the number of medical dispensaries in the small state from “three to 15” as well as adding “acute pain” to the conditions for which cannabis may be recommended. (Her proposal did not pass the legislature.) In a May 2018 interview, however, Raimondo stated that her position on legalization “evolved” following her own investigation of the effects of legalization in Colorado. “I would favor taking it slow,” Raimondo said, mentioning that studies should be conducted. Her opinion on legalization evolved after she “spent some time” talking to the governor of Colorado on the problems that have resulted from legalization in that state. She also learned that Colorado’s tax revenue from marijuana did not meet expectations. In addition, she read that children in Colorado have been eating edibles. Her investigation “really gave me a lot of concern.”

While Governor Raimondo has not ruled out legalization in Rhode Island, she and the leaders of the legislature have made it clear that they want to go slow. This would most likely involve conducting studies on implementation and research into how to avoid the mistakes of other states. When the legislature meets again in 2019, any legalization bill would likely address the expressed concerns of Raimondo, Ruggerio, and Mattiello.

What do you think? Will Rhode Island commission studies on legalization in 2019? Leave a comment below.