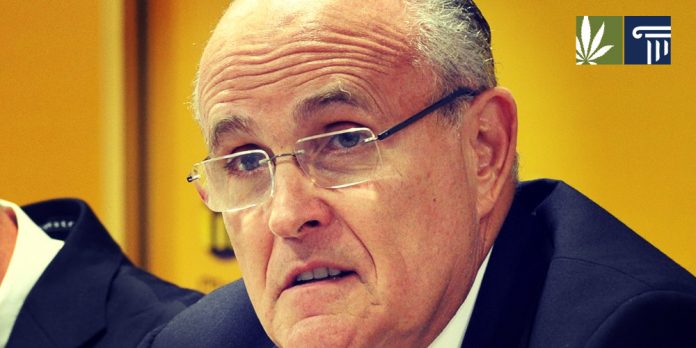 Two Ukrainian associates of Rudy Giuliani arrested last month were seemingly not content with seeking influence in US elections and President Trump’s inner circle. They also wanted to get a hold of cannabis licenses in Nevada.

And, of course, it appears that they pursued them in questionable and downright confusing ways.

Understandably, much of the media’s focus has been on Lev Parnas and Igor Fruman’s alleged illegal foreign donations, a total of $1 million, to a pro-Trump super PAC last year. Within their indictment though, is another charge that they also donated $10,000, the maximum allowed by an individual under electoral law, from a foreign source to both the Republican nominee for Governor of Nevada, Adam Paul Laxalt, and Nevada Attorney General candidate, Wes Duncan. This occurred during their respective campaigns, allegedly to secure much sought-after cannabis licenses in the state.

The thing is, though, that Laxalt, as those with much knowledge of Nevada cannabis politics will tell you, is notoriously anti-cannabis.

Prior to his failed governorship campaign, Laxalt served as Nevada’s attorney general where he spent much of his time opposing any pro-reform initiatives. He argued against retail sales in Nevada back in 2016 by saying it would put children at risk.

Even after retail sales were legalized in Nevada, he refused to put his weight behind a letter sent to Congress signed by all other attorney generals in legalized states urging lawmakers to pass the SAFE Banking Act.

Apparently, Laxalt’s record didn’t put off Fruman and Parnas. With conspiracy theories in fashion, it’s tempting to speculate that Laxalt, Fruman, and Parnas all preferred the current shadowy, cash-based marijuana industry instead of a more closely-regulated and traceable one.

The 21-page indictment, released last month, suggests that Laxalt and Duncan were targeted by Fruman, Parnas and an unnamed Russian benefactor with campaign contributions in the expectation that they would be awarded with cannabis licenses if their guys won.

But there was one other little detail Fruman and Parnas overlooked which derailed their pot-empire plans. They missed the deadline for cannabis license applications in Nevada by two months.

Upon realizing this, another of their associates, Andrey Kukushkin, told the group that they were stuck unless they could “change the rules.” To do so, as the indictment states, they would need to convince a “particular Nevada State official,” to give them the “green light to implement this.”

But some political experts are doubtful that this strategy would have paid off, even if Laxalt and Duncan had been successful. Or if they had actually got their application in on time, for that matter.

“It’s essentially a wasted donation,” said Michael Green, a political historian at the University of Nevada, Las Vegas. “The alleged ties to Giuliani would do much more for them than a 10,000 gift would.”

Even so, the handling of dispensary licenses in Nevada is far from squeaky clean.

In August, a Nevada District Court judge in Clark County determined that the Department of Taxation acted “arbitrarily and capriciously” in reviewing applications. Now, a bunch of dispensary license winners in Nevada are facing an injunction, while one tax official has been fired.

It seems Fruman and Parnas have been even less successful in their efforts to secure a cannabis license.

Duncan and a representative for Laxalt have both said they had no knowledge of any illegality with regard to their campaign contributions. They said they will return any illegal funds given to them.

The indictment itself points to no wrongdoing on Laxalt or Duncan’s part. The report states that the scheme was hidden from “campaigns, federal regulators, and the public.”