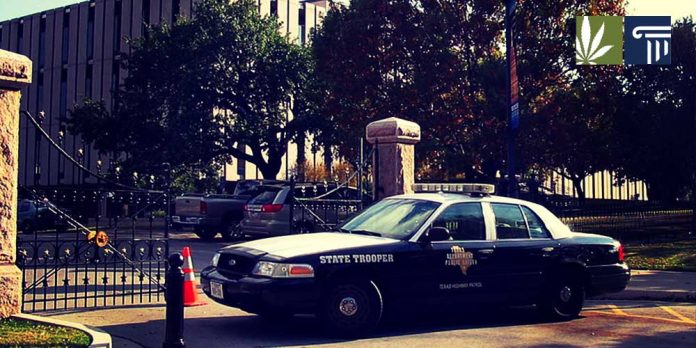 The largest law enforcement agency in Texas instructed its officers to no longer arrest people for low-level marijuana offenses, as detailed in an interoffice memo dated July 10, 2019.

The move follows a period of confusion over marijuana prosecutions since hemp was legalized in the state earlier this year.

Texas Department of Public Safety (DPS) officers are now asked to issue a citation to individuals suspected of a marijuana misdemeanor which, in the case of possession, amounts to carrying less than four ounces. The person would then be required to appear in court for their criminal charges.

If found guilty, persons would still be subject to the same penalties — a $4,000 fine and up to one year in jail.

“Departmental personnel are expected to continue enforcing marijuana related offenses,” the memo states. “However, effective immediately, personnel will cite and release for any misdemeanor amount of marijuana.”

The DPS memo was written by the deputy director of law enforcement operations, Randall Prince, to clarify procedures in the wake of the new hemp bill signed into law in June which has caused difficulties for prosecutors.

“Because marijuana and hemp come from the same plant, it is difficult to definitively distinguish the two without a laboratory analysis,” Prince said.

And conducting a laboratory analysis of the suspected drug in criminal cases has proven tricky, as the equipment is not yet available in government crime labs. This means that hundreds of low-level marijuana cases have been dropped for the time-being.

Though prosecutors may not currently be able to prove beyond a reasonable doubt whether a substance is marijuana or hemp, the DPS memo makes clear that officers can still find probable cause for issuing a citation.

Prince noted that the fact that hemp production hasn’t yet begun in Texas means it is “unlikely that any substance encountered now is hemp.”

There are certain caveats to the policy and since the DPS are yet to respond to questions about the memo, it is hard to guess how the new law enforcement policy will affect marijuana prosecutions across the state.

For instance, Texas law states that citations in lieu of arrest may only be issued if the suspected crime occurs in the same county where the suspect lives. So, if a DPS officer suspects that they have found marijuana during a traffic stop on a highway far from the suspect’s home county, they will then be arrested.

The memo also says officers should first consult with local prosecutors and then follow their direction on whether to cite or arrest.

More and more law enforcement agencies in Texas have cite-and-release policies for low-level charges, and they have also established a specific court system to deal with these cases. But many other counties have no such systems or policies in place.

“It’s a collaborative effort,” said Troy Gay, Austin Police Department’s chief of staff. “If a court does not have a cite-and-release process set up, there’s no way for any law enforcement in that jurisdiction to do that.”