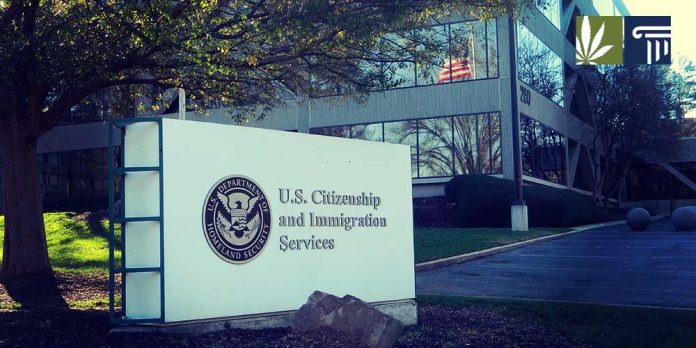 Using cannabis or involvement in marijuana-related businesses – even in states where it is legal – makes applicants for naturalization ineligible for citizenship, a federal immigration agency clarified last month.

Immigrants to the U.S. who seek citizenship are required to demonstrate “good moral character” in the five years preceding their application. Scholars and civil rights advocates criticize the use of such vague criteria, as morality is arguably a subjective matter.

But for the U.S. Citizenship and Immigration Services (USCIS), state-legal marijuana consumption and employment is a clear barrier to an individual’s application for U.S. citizenship. The new policy clarification echoes an opinion expressed by former Attorney General Jeff Sessions, who said that “good people don’t smoke marijuana.”

According to the USCIS, “violation of federal controlled substance law, including for marijuana, established by a conviction or admission, is generally a bar to establishing [good moral character] for naturalization even where the conduct would not be a violation of state law.”

The released memo goes on to say that an applicant “who is involved in certain marijuana-related activities may lack GMC if found to have violated federal law, even if such activity is not unlawful under applicable state or foreign laws.”

The policy therefore applies to workers in state-legal cannabis industries.

The USCIS clarification, recently posted on Twitter, follows in the wake of reports that individuals have already been denied citizenship because of their work in state-legal marijuana businesses. Denver Mayor Michael Hancock brought the situation to light last month when he hosted a group of immigrants who had their applications rejected by federal officials on this basis. Rep. Joe Neguse (D-CO) responded with the following:

In Colorado, cannabis has been legal for 5 years. For work in a legal industry to be used against an individual trying to gain citizenship is a prime example of why we need to harmonize our state and federal laws to ensure that states like Colorado that have moved to legalize cannabis can act in our own authority to expand and regulate our cannabis industry.

“The cruel treatment of immigrants for offenses related to something as minor as marijuana is illustrative of the way this administration has used the war on drugs to pursue communities of color,” said Michael Collins, director of national affairs at the Drug Policy Alliance. “It also shows that pursuing a state by state approach to federal policy doesn’t work for these communities. Federal descheduling is essential.”

Associating marijuana-use with questionable moral character for citizenship applications is not a new approach for the USCIS, but the explosion of state-level legal marijuana use and industries has pushed the agency, as part of the Department of Homeland Security, to issue the clarification.

“A number of states and the District of Columbia (D.C.) have enacted laws permitting ‘medical’ or ‘recreational’ use of marijuana. Marijuana, however, remains classified as a ‘Schedule I’ controlled substance under the federal CSA. Schedule I substances have no accepted medical use pursuant to the CSA. Classification of marijuana as a Schedule I controlled substance under federal law means that certain conduct involving marijuana, which is in violation of the CSA, continues to constitute a conditional bar to GMC for naturalization eligibility, even where such activity is not a criminal offense under state law,” the updated USCIS policy manual now reads.

“Such an offense under federal law may include, but is not limited to, possession, manufacture or production, or distribution or dispensing of marijuana. For example, possession of marijuana for recreational or medical purposes or employment in the marijuana industry may constitute conduct that violates federal controlled substance laws. Depending on the specific facts of the case, these activities, whether established by a conviction or an admission by the applicant, may preclude a finding of GMC for the applicant during the statutory period. An admission must meet the long held requirements for a valid ‘admission’ of an offense. Note that even if an applicant does not have a conviction or make a valid admission to a marijuana-related offense, he or she may be unable to meet the burden of proof to show that he or she has not committed such an offense.”

An exception is provided in the updated policy for “a single offense of simple possession of 30 grams or less of marijuana.”

The earlier 2014 version of the USCIS policy manual contained no such provision.

The USCIS’s updated clarification is similar to that issued by the Bureau of Alcohol, Tobacco, Firearms and Explosives (ATF) in 2017 when revisions to the federal gun purchase application form inserted a warning that the “use or possession of marijuana remains unlawful under Federal law regardless of whether it has been legalized or decriminalized for medicinal or recreational purposes in the state where you reside” and therefore disqualifies certain applicants.

The USCIS’s latest move is part of a broader trend within the Trump administration of anti-immigrant rhetoric and policy, including the association of immigrants with drugs.

Jason Ortiz, vice president of the Minority Cannabis Business Association, said that the new memo “is a reminder that without comprehensive cannabis reform our communities of color will continue to be prosecuted and subject to deportation for activity that is legal for affluent communities around the country.”

“Proposals such as the STATES act which seek to simply ease the risk on business do not address these deeper issues related to federal prohibition,” he said. “Considering the devastating effects our war on drugs had on Latin America, immigration reform must be a necessary component of any comprehensive cannabis legalization policy.”