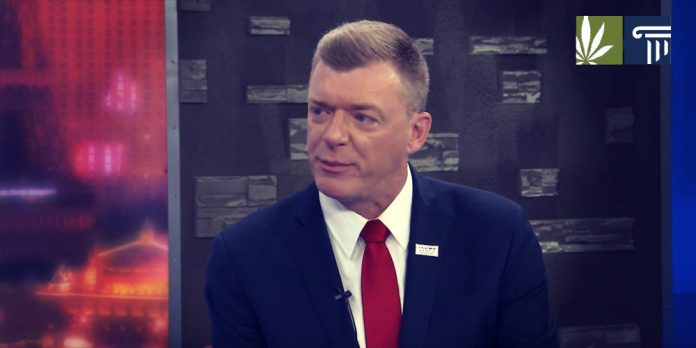 One of President Trump’s top re-election campaign officials said the administration intends to keep cannabis illegal, as well as other currently illicit drugs.

Marc Lotter, Trump’s director of strategic communication for the 2020 campaign, made the stance clear in response to a question from Vanessa Murphy of Las Vegas-based KLAS-TV.

“They need to be kept illegal,” he said. “That is the federal policy.”

“I think what the president is looking at is looking at this from a standpoint of a parent of a young person to make sure that we keep our kids away from drugs,” he added.

Watch the interview in full below.

Lotter noted that most states have passed some kind of cannabis reform legislation and seemed to reiterate Trump’s preference for letting state’s determine their own marijuana policy.

“I think the president has been pretty clear on his views on marijuana at the federal level,” Lotter said. “I know many states have taken a different path.”

Indeed, in rare displays of consistency, President Trump has regularly voiced support for letting states determine their own marijuana policy without federal intervention. Last year, he described marijuana legalization as a “very big subject” but stressed “we’re allowing states to make that decision.”

It’s clear though that President Trump’s words and his actions, or those of his administration officials, do not always align. When submitting his 2021 budget proposal, Trump sought to remove a congressionally-approved rider prohibiting the US Department of Justice from intervening in state-legal medical marijuana programs. Trump’s budget proposal also prohibits Washington, D.C. from using tax dollars to fund a legal adult-use marijuana industry, even though the District voted to legalize cannabis. Trump’s move came shortly after a coalition of advocacy groups sent a joint letter to congress urging lawmakers to let state officials in Washington, D.C. set up a legal cannabis market.

What’s more, Trump’s first attorney general, Jeff Sessions, revoked an Obama-era directive instructing federal prosecutors to largely respect state-level cannabis policies. The Trump administration has also said that cannabis use or any involvement with the marijuana industry, even in states where it is legal, is sufficient grounds to reject applicants seeking naturalization in the US.

While Trump’s stance on marijuana is confusing, all but one of the Democratic nominees for the presidency supported federal-level marijuana reform. Unfortunately, the one Democrat who remains opposed, former Vice-President Joe Biden, has a long history of supporting harsh drug laws and looks likely to secure the nomination after a series of wins in the Democratic caucuses.