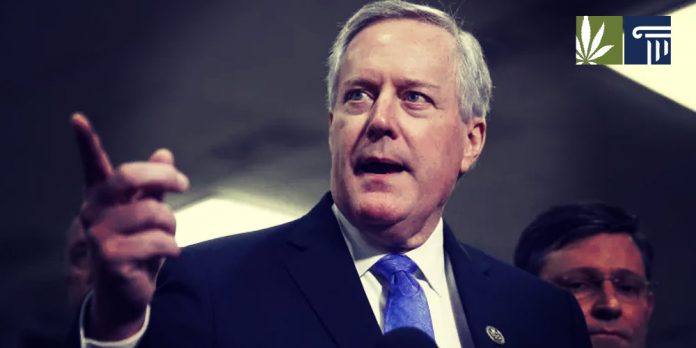 Since his election to the House of Representatives in 2013, Rep. Meadows has voted against just about every piece of legislation aimed at reining in the federal prohibition of cannabis, including a 2015 amendment to shield children and families using state-legal CBD-based medicines from Justice Department investigations.

More recently, he and 11 other GOP lawmakers sent a Senate committee chairman a letter of thanks for postponing debate on a House-passed bill that would enable legal marijuana businesses to access banking services without federal interference. The SAFE Banking Act has stalled in the Republican-controlled since October, 2019.

“We remain opposed to liberalizing drug laws (including around banking), and we see these as some of our areas of greatest concern,” the letter, sent in February, 2020, read. “We must protect our youth by preventing investment into companies that would prey upon them.”

Meadows was also one of the few lawmakers to come out in support of Trump’s first attorney general, Jeff Sessions, when he decided to revoke an Obama-era directive instructing federal prosecutors to respect state marijuana laws.

“There comes a point where you allow states to affect federal policy instead of the other way around and I think that that’s troubling, he said in an interview with Fox News. “So I support Attorney General Sessions in this move.”

Meadows’ voting record in Congress makes dire reading for pro-marijuana reform advocates. He opposed amendments in 2014, 2015 and 2016 to allow military veterans access to medical cannabis subject to a physician’s recommendation at the Department of Veteran Affairs. On four occasions between 2014 and 2019 he voted against floor amendments to stop the Justice Department from interfering with state marijuana laws, including local medical cannabis policies. Meadows has even consistently opposed measures to protect hemp growers from federal interference.

Has Meadows ever voted in favor of marijuana legislation? Well, he cosponsored the 2015 “No Welfare for Weed Act” to ensure food stamps could not be used to purchase cannabis products.

While Meadows’s position on marijuana is all too clear, Trump has been sending mixed signals. On several occasions the president said he wants to let states decide marijuana policy for themselves. Yet, his actions and those of other administration officials often contradict this position. Trump’s recent budget proposals to Congress sought to remove a congressional rider protecting state medical marijuana laws from federal interference. This rider has been in place in every federal budget since 2014. In previous years when passing spending bills into law, Trump has chosen to make statements clarifying that he reserves the right as president to ignore the rider.

Meadows’s appointment to White House chief of staff, alongside a recent TV interview whereby Trump reelection campaign spokesman said the administration’s view is marijuana should remain illegal, gives some cause for concern among marijuana legalization advocates.

“If the president wanted to send a signal that he opposes cannabis reform in 2020, tapping Mark Meadows to be the chief of staff is the way to do it,” said Justin Strekal, political director for NORML. “With his long record of actively supporting marijuana criminalization and further discriminatory measures against cannabis consumers, Meadows embodies everything that is wrong with the prohibitionist mentality.”

It’s worth bearing in mind though that Meadows’s predecessor, Rep. Mick Mulvaney, consistently voted in favor of marijuana reform amendments, and this did not translate into pro-marijuana reform initiatives within the White House. So, it is far from a given that Meadows’s views, or that of any single official within the Trump administration, will have much of a bearing on policy.

As Don Murphy, federal policies director of the Marijuana Policy Project, puts it: “One thing we’ve learned over the past three years is that the only position that matters in the Trump Administration is Trump’s.”