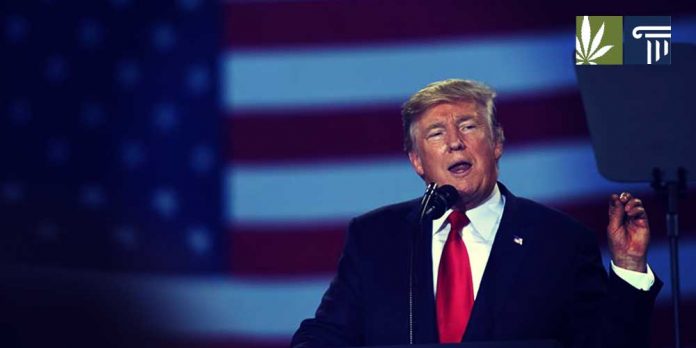 The Trump administration will not stand in the way of states setting their own marijuana policies, according to the president’s most recent statement on the issue.

President Trump was responding to a question from DC Examiner journalist Steven Nelson, who asked whether marijuana would be legalized at the federal level before Trump leaves office.

Nelson made mention of studies indicating that states which have implemented legal marijuana industries have suffered fewer opioid overdoses than prohibition states.

While Trump is renowned for making u-turns on policy positions, he has given his support for states to determine their own marijuana laws on several occasions.

He came out in favor of legalizing medical marijuana during his presidential campaign, and said that broader legalization “should be a state issue, state-by-state.”

Back in June 2018, Nelson once again asked Trump his position on marijuana policy, specifically a bipartisan bill sponsored by Sen. Cory Gardner (R-CO) to shield states with legal marijuana industries from federal interference. Trump responded that he “really” supports the bill.

Trump’s support was echoed by his attorney general, William Barr, during a Senate hearing in April. He said he would be in favor of looking at legislative options through Congress to reconcile conflicts between federal and state marijuana laws, such as Gardner’s bill.

While the House recently passed an amendment to spending legislation which gives protection to states with legal marijuana systems in place from federal interference, it is still unclear whether it will pass the Senate.

The same is true for Gardner’s bill, among other pieces of marijuana legislation.

“The reiteration of a non-enforcement policy from the president is a clear sign that states should continue to defy the federal government when it comes to marijuana prohibition,” said Justin Strekal, political director for NORML.

“Congress should swiftly move pending legislation when it returns from the August recess to remove cannabis from the Controlled Substances Act and provide the legal relief needed to those individuals and businesses who are struggling under our nations cruel policy of criminalization.”