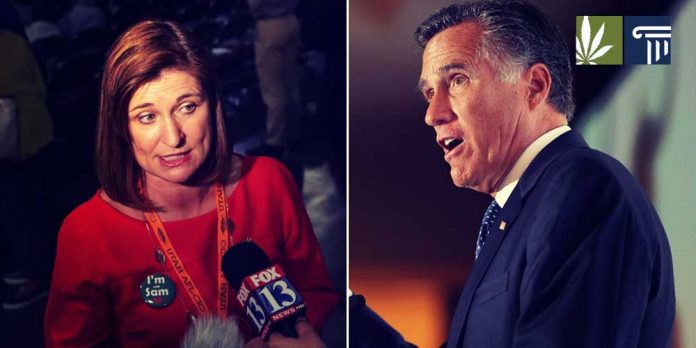 Orrin Hatch of Utah is 83 and the longest-serving Republican senator, having first been elected in 1977. Earlier this year, he announced that he would not seek reelection, saying: “After much prayer and discussion with family and friends, I’ve decided to retire at the end of this term.” His approval rating was dipping below 50 percent, according to polls. Hatch’s announcement prompted bids for his seat from Republican Mitt Romney and Democrat Jenny Wilson. Republicans outnumber Democrats 750,682 to 195,304 in the state, so Romney is expected to win easily in November.

Both Agree on Descheduling

The candidates’ views on marijuana differ significantly, but they both agree that marijuana should be removed from its designation under federal law as a Schedule 1 drug with no medical value and a high potential for abuse. Romney believes that removal from Schedule 1 should be done so that the claimed medical benefits of marijuana can be studied scientifically. Wilson characterizes the Schedule 1 classification as “ridiculous.” She also promises that, if elected, she would make it a priority to deschedule.

The candidates disagree on Proposition 2, however. The voter initiative, which will appear on the ballot in November, would create a medical marijuana program in Utah. Romney opposes the measure and has said that medical marijuana should be approved by lawmakers, not via ballot initiative. He has also claimed that medical marijuana should be provided by pharmacies, not dispensaries. This latter claim ignores the fact that so long as marijuana is a schedule 1 drug, pharmacies, which are regulated by the federal Food and Drug Administration, cannot fill orders for medical marijuana. Romney is also opposed to adult use and is undecided on whether the federal government should more vigorously enforce its laws in legal states. “I’d need to see more information about what impact it is having elsewhere before I could make that call,” he told the Salt Lake Tribune.

Wilson, on the other hand, supports Proposition 2 and supports the legalization of medical marijuana. She opposes recreational marijuana in Utah but supports the rights of other states to choose differently. The opinions of both candidates are in alignment with that of their parties generally, but polls indicate that Proposition 2 has the support of a solid majority of Utah’s voters. The poll numbers make it clear that many Republican voters in the state do not agree with the official position of their party leaders and the Mormon church. Proponents of Proposition 2 have cited the state’s opioid crisis, personal experience with chemotherapy, and the need of veterans to treat chronic pain and PTSD as reasons to support Proposition 2.

Although Romney is heavily favored to win the senate race, Wilson’s positions on medical marijuana are more in line with those of Utah’s voters—something Romney and other politicians in the state may not be able to overlook for as long as Hatch has served in the Senate.

What do you think? Is there a chance that marijuana will be descheduled by the next Congress? Leave a comment below.